July 24 is a very significant date in both Mormon and Utah state history. On Saturday July 24, 1847 – after nearly 17 months, and hundreds of miles of weary wagon travel – Brigham Young led an “advance party” of 148 pioneers into Utah’s Valley of the Great Salt Lake.

They sought a sanctuary where their people could live in peace, and enjoy religious and political freedom.

Brigham Young was not there by accident. He was a visionary leader who had studied and personally reviewed all available information on the Great Salt Lake Valley and the Great Basin. He had consulted with mountain men and trappers who traveled through the pioneer Winter Quarters, and had met with Father Pierre-Jean De Smet, a Jesuit missionary familiar with the Great Basin. Wary and weary from years of persecution, Brigham Young insisted the saints should settle in a location that no one else wanted. The Great Salt Lake Valley sounded like it met all of the requirements. Now, months later, Brigham Young gazed over the parched earth of that remote location and prophetically declared, “This is the right place!”

These advance pioneers immediately began preparations for the tens of thousands of Mormon migrants who would soon follow. Within hours of arrival Brigham Young had designated the location for a new Temple, and begun mapping out the city streets.

In October of that same year, Young rejoined the main body of pioneers camping in Winter Quarters, Nebraska and across the river in Kanesville, Iowa. It was there that he was named president and sustained as prophet of the Church of Jesus Christ of Latter-day Saints, formally succeeding the prophet Joseph Smith who had been murdered three years earlier.

In 1848, Brigham Young organized and led an exodus of thousands of Latter-day Saints to the Great Salt Lake. More large waves of Mormon pioneers followed.

By 1852, over 16,000 Mormons had come to the Great Salt Lake valley, some in wagons and some pushing and dragging handcarts.

By 1869, over 80,000 Mormons had made the trek to their promised land, and the valley as prophesied was “blossoming like a rose”.

It’s been 168 years since the Mormon Pioneers began their great Western Exodus, led by the “American Moses” Brigham Young. Every year we celebrate this event with pioneer re-enactments, parades, plays, cookouts and fireworks. But, is that the best way to honor their legacy? How can we truly remember and memorialize them?

He asked us to remember the Eternal Principles of the pioneers, and then to learn to walk in their footsteps to become pioneers for our own posterity. 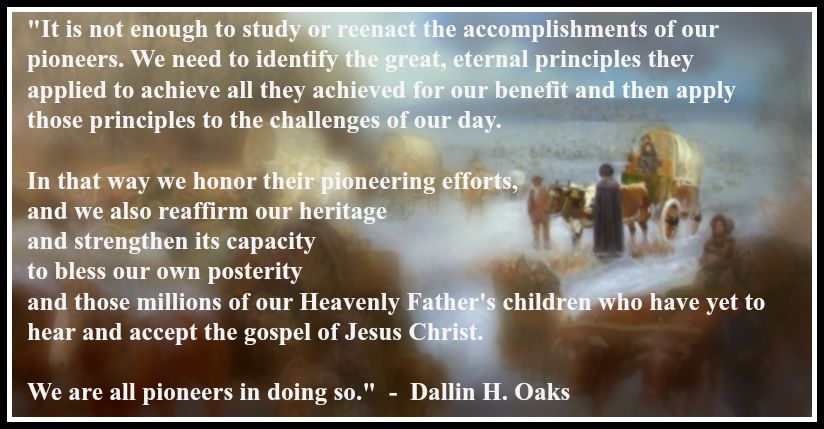 What are the Eternal Pioneer Principles?

These are what I have so far. What other Pioneer Principles can you think of?

What are the pioneer principles that “reaffirm [your] heritage and strengthen its capacity to bless [your] own posterity and those millions of our Heavenly Father’s children who have yet to hear and accept the gospel of Jesus Christ.”? – MoSop

Enjoy this excerpt of a video called “Mormon Pioneers: Faith In Every Footstep” with LDS leaders narrating historic events, including the late Gordon B. Hinckley and James E. Faust, and a young President Thomas S. Monson.

Follow @mormonsoprano
#GeneralConferenceOctober 3rd, 2020
The big day is here! Tune in at https://www.churchofjesuschrist.org/