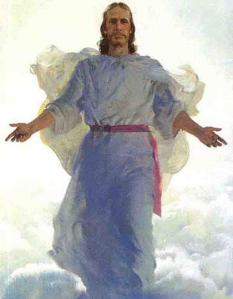 In April 1972 Elder Bruce R. McConkie, an apostle in The Church of Jesus Christ of Latter-day Saints shared a personal poem he had written as part of his general conference address.

The poem is a definitive testimony of Jesus Christ. The verses attracted overwhelming attention and immediate love. They were first set into an anthem by Latter-day Saint composer Rhea B. Allen. However, a simpler setting was written by Tabernacle organist John Longhurst for the 1985 LDS hymnbook edition.

The new hymn was introduced to the Church at the April 1985 General Conference sung by the Mormon Tabernacle Choir . As detailed in my previous post, this would turn out to be the final conference in which Elder McConkie would participate, as he died just 12 days afterward. It seems a tender mercy that the Lord allowed him to hear his hymn performed before calling him home.

“This was Elder McConkie’s last conference – the one in which he left his final testimony in a way that those who heard it shall never forget.”

It has been said that a hymn may become a powerful witness, and by pondering its words through the Holy Spirit can become akin to personal scripture to guide our lives. The hymn “I Believe In Christ” has that profound effect on this author.

The following video by Seth Adam Smith beautifully illustrates this poem, as the Mormon Tabernacle Choir performs Mack Wilberg’s orchestration. The full text to the hymn can be read below.

I Believe In Christ

I believe in Christ; he is my King!

With all my heart to him I’ll sing; I’ll raise my voice in praise and joy, In grand Amens my tongue employ.

I believe in Christ; he is God’s Son!

On earth to dwell his soul did come. He healed the sick; the dead he raised. Good works were his, his name be praised.

As Mary’s Son he came to reign. ‘Mid mortal men, his earthly kin, To save them from the woes of sin.

I believe in Christ; who marked the path!

Who did gain all the Father hath. Who said to men, Come, Follow Me, That ye, my friends, with God may be.”

I believe in Christ – my Lord, my God!

My feet he plants on gospel sod. I’ll worship him with all my might; He is the source of truth and light.

I believe in Christ; he ransoms me!

From Satan’s grasp he sets me free. And I shall live with joy and love In his eternal courts above.

I believe in Christ; he stands supreme!

From him I’ll gain my fondest dream. And while I strive through grief and pain, His voice is heard;

I believe in Christ; so come what may!

With him I’ll stand in that great day, When on this earth he comes again To rule amoung the sons of men.

Resources for this article: