Marriage is a “hot topic” right now in the media and the blog world due to Proposition 8 in California. Emotions are running high. There is much being said regarding this topic, combined with intensive personal investments of energy, money, time and effort. Some reports are staying neutral and open-minded, but often the tone becomes bitter, negative, and contentious. This saddens me, and I encourage my readers not to participate in spiteful conversations. Please take the high road. Or, as Elder Robert D. Hales so beautifully instructed in his recent Conference Talk – show your love and discipleship by practicing Christian Courage. I give fair warning that this site is a “contention free zone“. I invite anyone who prefers a war of words and intolerance to go elsewhere. However, I hope that the rest of you will stay, read, share your thoughts and participate in gaining better understanding and respect.

It is not my wish to add another “Proposition 8 Battle-Cry” to the pile. Instead, I would like to devote this post to the core issue in question: 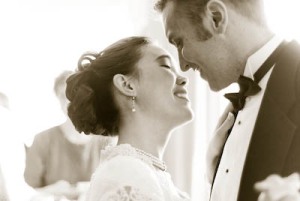 Specifically, I would like to give you a brief explanation of what The Church of Jesus Christ of Latter-day Saints (“Mormons”) believe about Marriage.

Marriage and Family mean everything to us. It is part of God’s Holy Plan. We believe that being part of a family unit is essential to each stage of our progression; before this life, during this life, and in the life to come.

We believe that all of us lived as one large family before this life. Spirit children; brothers and sisters, with Heavenly Parents. God our Heavenly Father created this earth as part of a divine plan, which included receiving a body, and a family. This life would be our time to prove ourselves, exercise our free agency, and live by faith. After this life ends, we will continue to live and progress. An important part of God’s Plan is to provide the way for us to be eternally linked with the people who mean the very most to us; our family.

“The earth was created and this Church was restored so that families could be formed, sealed, and exalted eternally. – Elder Russell M. Nelson

The Latter-day Saint doctrine places the highest level of importance upon Marriage and Family:

“Marriage is considered by a great many people as merely a civil contract or agreement between a man and woman that they will live together, ‘until death do you part.’ It is [in fact] an eternal principle upon which the very existence of mankind depends. The Lord gave this law of marriage to man in the beginning of the world as part of the gospel law. In the gospel plan, marriage should endure forever.”

“No ordinance connected with the gospel of Jesus Christ is of greater importance, of more solemn and sacred nature, and more necessary to the eternal joy of man than marriage in the house of the Lord.” – President Joseph Fielding Smith (emphasis added)

In the first pages of the Bible we read about the beginning of the earth, and God’s great Creation. He creates the heaven and earth, planets, stars, plant life, and animal life…all glorious miracles. However, everything was in preparation for the crowning event, which was to create mankind “in his own image –male and female”. These first earthly parents were named Adam and Eve. Adam and Eve were specifically created to be together, joined in matrimony as husband and wife:

“And the Lord God caused a deep sleep to fall upon Adam, and he slept: and He took one of his ribs, and closed up the flesh instead thereof; And the rib, which God had taken from man, made he a woman. And brought her unto the man. And Adam said, This is now bone of my bones, and flesh of my flesh: she shall be called Woman, because she was taken out of Man. Therefore shall a man leave his father and his mother, and shall cleave unto his wife and they shall be one flesh.” – Genesis 2:21-24

Acheiving Oneness as a married couple takes constant effort and nurturing of the relationship. The first command God gave to Adam and Eve was to “be fruitful and multiply and replenish the earth”. Of all the important instructions He would give to them, the number one priority was for them to become a family.

Child rearing is part of God’s plan. A husband and wife have the privledge of co-creating life with God. Together a husband and wife can provide a physical body for God’s spirit children waiting for their turn on earth. Eve recognized this divine miracle when she bore her first child:

“And Adam knew Eve his wife; and she conceived, and bare Cain, and said, I have gotten a man from the Lord.” – Genesis 4:1 (emphasis added)

Members of the church live a high standard of sexual morality. We teach our children how special their bodies are, and that the power to create life is very sacred. Any intimate relations are only proper between a husband and a wife who have been united in the bonds of matrimony. God requires us to live lives of sexual purity and chastity before marriage and complete fidelity afterwards. The misuse of our holy sexual power is offensive to God, and it is the cause of great sorrow and chaos in the world.

In 1995, the First Presidency and the Quorum of the Twelve Apostles — the Church’s two highest governing bodies — issued a proclamation explaining the divine nature of the family and how family relationships should be conducted and nurtured. (Read “The Family: A Proclamation to the World

We also hold a high standard for marriage. We believe that marriages performed in temples are “sealed”. This means that they are blessed to last not just until “death do you part”, but for Time and All Eternity (a past post).

The concept of eternal families comes from scripture and modern-day revelation. For instance, the New Testament records Jesus Christ telling the Apostle Peter:

The significance of a temple marriage which is sealed by the power of the Priesthood is crucial to our salvation. A man and a woman cannot obtain the highest blessings without being joined together in this type of marriage:

“In the celestial glory there are three heavens or degrees; And in order to obtain the highest, a man must enter into this order of the priesthood [meaning the new and everlasting covenant of marriage]; And if he does not, he cannot obtain it. He may enter into the other, but that is the end of his kingdom; he cannot have an increase.” – Doctrine & Covenants 131: 1-4

Once a couple is married and sealed in a temple, any children who are then born to them are automatically sealed to them at birth. If children are born before the couple is sealed, those children can later participate in a temple sealing with their parents. Children that are adopted also have an opportunity to be sealed to the adoptive parents.

The concept of a united family that lives and progresses forever beyond the grave is at the very core of Latter-day Saint doctrine. Within families led by a father and a mother who honor their marriage vows and temple covenants, children are raised in security, love and peace. They develop virtues such as love, trust, loyalty, cooperation and service.

The Church, and our Heavenly Father, realizes that we live in a complex and imperfect world. This plan is the ideal of Marriage and Family. There are those who wish to be married but have not had the opportunity yet, and may not be able to in their lifetime. There are those who have suffered with unhappy marriages, abuse, or divorce. There are those happily married couples who long to bring children into their home, but are unable to bear children. There are those who must cope with Same Gender attraction, and other gender identity challenges. The list of unique problems and issues and circumstances is as long as there are individuals. All of these difficulties, and more, are part of our mortal existence. However, God’s Plan of Happiness is still in effect for every one of His children, and it remains an eternal promise of happiness for ALL. If any of these blessings cannot be realized in this life, through no fault of our own, then they will be realized in the next life.

I have now shared with you a basic overview of what Marriage and Family means to Latter-day Saints. Our Heavenly Father has provided a beautiful plan which allows us to reach our greatest potential and have the greatest joy. Everything which we do within our church is with this plan in mind, and the goal to strengthen families and bind and seal families together forever. Both for the living, and the deceased.

The Family: A Proclamation to the World, as mentioned, is something for all to read. It offers a clear and powerful voice. It was given as a guide for all people and families throughout the earth. The proclamation addresses both the ideal and the difficult circumstances. It also contains a prophetic warning:

“We warn that individuals who violate covenants of chastity, who abuse spouse or offspring, or who fail to fulfill family responsibilities will one day stand accountable before God. Further, we warn that the disintegration of the family will bring upon individuals, communities, and nations the calamities foretold by ancient and modern prophets.”

“…Celestial marriage is a pivotal part of preparation for eternal life. It requires one to be married to the right person, in the right place, by the right authority, and to obey that sacred covenant faithfully. Then one may be assured of exaltation in the celestial kingdom of God. I so testify in the name of Jesus Christ, amen.” – Elder Russell M. Nelson, LDS Apostle