Once in awhile truly amazing, miraculous, breath-taking, life-changing things happen to ordinary people. Something like that just happened to my friend Seth Adam Smith and his wife Kim. Living proof that really BIG things do come from small and simple beginnings.

Some husbands would apologize by sending flowers or buying jewelry. Seth gave the gift of his heart through prose. His blog tribute “Marriage Isn’t For You” created an unexpected firestorm and became an instant hit on Social Media. Within a handful of hours it had officially gone viral, and within a handful of days it had become the stuff of legend.

Seth begins, “Having been married only a year and a half, I’ve recently come to the conclusion that marriage isn’t for me.”

Literally millions of people – over 24 Million as of today – all across the world experienced the momentary fear Seth was walking out on Kim! Then came the endorphin rush of relief that “true love” had indeed won the day. Readers have felt new hope in “marriage” as the secret was revealed:

“a true marriage (and true love) is never about you. It’s about the person you love—their wants, their needs, their hopes, and their dreams. Selfishness demands, “What’s in it for me?”, while Love asks, “What can I give?”” – Seth Adam Smith

In a world where the commitment of marriage is becoming viewed as “antiquated”, and divorce or never marrying at all is the new normal,  it’s heartwarming to see this brave young couple weathering their early storms together, staying committed to each other and their sacred vows. Seth and Kim have unwittingly become young ambassadors for marriage. The world needs many more Mr. & Mrs. Smith’s!

My own sweet Mr. and I will celebrate our 24-year wedding anniversary next month. We met 26 years ago at a Halloween party that neither of us wanted to attend but didn’t want to offend our mutual friend Michelle. So, through fate, and more than a little divine intervention, we both found ourselves there, seated next to each other playing a silly party game, and feeling massive doses of crazy-instant chemistry! 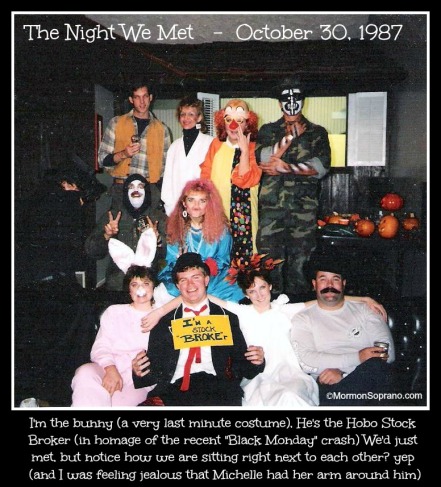 The party broke up less than an hour later with most people heading off to a dance. Jeff offered to ride with me to “show me where the dance was” (ooh…smooth!). We were inseparable all night and had a fantastic time together. But, true to every good romance story, things were complicated.

For starters, I was leaving in just 10 days for an 18-month church mission service where I would be thousands of miles away, with no contact except 1 weekly snail-mail. (ah yes, those were the days…)

Oh, and I also had a serious boyfriend who planned to marry me when I got home. He was currently serving his own church mission thousands of miles away at the time (convenient for Jeff!) .

We ended up spending every waking moment together over the next whirlwind 10 days of dating/packing/dating/farewell-ing. He even came with my family to drop me off and bid me goodbye at the Provo Missionary Training Center. (Yes, after only 10 days he’d already become part of the family).

He promised to write.

I thought it couldn’t last.

I convinced myself it had all been a “test” to see if I’d keep my mission commitment to God. He would find someone else soon. I’d get a “Dear Jane” letter, shed some tears, and would return in 18 months to marry my “serious boyfriend” and live happily ever after.

Little did I know just how much more complicated things could get! [hint: Jeff did write, and faithfully waited for me. So did my “serious boyfriend“]

Having been the oldest child of three caught in a bitter divorce custody battle during my early years, to say I was gun-shy of marriage was an understatement. I was terrified of having to go through something my mother did. I definitely didn’t want future children to suffer what I had as a child. So, I can keenly relate with the fears Seth had as he struggled with the decision to get married, and wondered if Kim was the right choice. The classic advice he received from his wise father is advice I know my 21-year-old heart sure would have taken courage from. I’m grateful that so many around the world are getting that advice thanks to Seth’s post, and feeling inspired.

“To all who are reading this article—married, almost married, single, or even the sworn bachelor or bachelorette—I want you to know that marriage isn’t for you. No true relationship of love is for you. Love is about the person you love.” – Seth

Mr. Mo and I have definitely learned about selflessness. We’ve been on a journey of epic proportions; we’ve had epic financial struggles, health issues, adventures, sorrows, joys. We welcomed children into our marriage, which launched us to “Advanced Marriage level” and then things became “taking-the-ring-to-Mordor” kind of epic. And also, “I-can’t-believe-how-lucky-I-am-to-have-you-and-how-big-my-heart-could-grow” kind of epic!

We’ve found each time we’ve weathered one storm together, it’s strengthened our bond. We feel a little stronger and more confident when the next challenge hits. “We got through ______, we can do this, too, right?!”

The challenges don’t necessarily get easier because they are always something new we haven’t faced before, but, like seasoned warriors, we’ve learned how to work as a team, and use each other’s strengths to protect each other’s weak spots. [we’ve also suffered first hand the painful consequences when we selfishly and cruelly choose to target each other’s weaknesses]

Marriage will stretch you to your limits. And then stretch you a little bit more. We’ve walked side-by-side now for 24 years. Perfectly imperfect. Fatally flawed. But, soul mates and best friends. If we can do it, so can others.

Our advice to Seth & Kim and anyone else starting out on this journey: [here comes the ‘cant-resist-offering-sage-advice’ moment, just humor us]:

In marriage, it is the little things, day-by-day that make truly amazing, breath-taking, miraculous, life-changing things happen to ordinary people!