Yesterday we had an unintended late night. After our museum tours we decided to walk back to the hotel to enjoy more of the city. We discovered the Amsterdam Tulip Museum [with a store – hooray! Tulips are my favorite flowers] We saw the long line of people across the street waiting for a chance to see the Anne Frank House. Oh, how I longed to see it! Reading Anne Frank’s diary had such a impact for good on me as a young woman. Then, in High School, I played the part of Mrs. van Daan in the stage play Diary of Anne Frank, which was a powerful, life-changing experience. Having the chance to go inside their 2 year hideaway and actually see where everything took place that I tried to portray, would be so incredible. But, tickets sell out months in advance, and a stand-by line usually requires a 3 hour or more wait.

“How wonderful it is that nobody need wait a single moment before starting to improve the world.”

We saw sooo many beautiful things and we took sooo many endless photos of bridges, bicycles, canals and boats… all while adding 25,000 steps to our FitBit. And very tired legs. 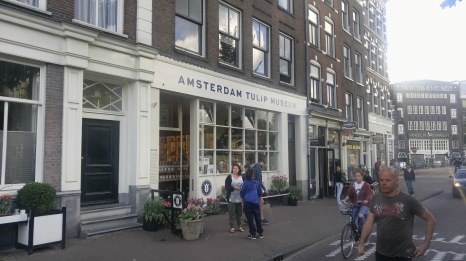 Best find of the day!

We decided to take a “short nap”, which is how we found ourselves wandering the streets of Amsterdam bleary eyed and starving at 11:00 PM trying to find somewhere open for dinner other than a hidous American food chain [according to our concerige “all of the kitchens close here by 10 PM except McDonalds”. Great. We also needed someone who would take a credit card because we were running very low on Euro. Eventually we found ourselves eating in a completely empty Portuguese Steak House, on a sketchy street in Amsterdam, with a cranky waiter who paced back and forth across the small restaurant while we tried to eat, not even trying to be subtle that he wanted us to hurry up and go. [Wow. That is so un-Eruopean.] When the pacing didn’t seem to make us chew any faster, he stood in the entrance-way and started smoking. I swear he was blowing the smoke our direction. Ugh. Oh, and the steak wasn’t even good. And by the way, if you order a steak in Europe you need to go up at least two notches in your “cooked preference” request, in order to hit your desired consistency. Because, if you ask for “Medium”, you are going to get “totally-raw-and-still-bleeding”. Always ask for “Well Done”, trust me.

This morning Mr. Mo felt a head cold coming on and wanted to catch and stop it early with lots of Zinc and rest. He headed back to bed after breakfast. I really had my heart set on a romantic canal cruise. So, I nixed the “romantic” part and I went alone. When I arrived at the dock, there was a huge crowd of Asian tourists ahead of me, but I got a “single rider” pass to get on the boat that was leaving immediately. I laughed when I found myself sitting down next to my choir friend Denise – also going solo! Turns out, her hubby had opted for the science museum. She opted for the cruise. So, there we were – sharing our “Lover’s Canal Cruise” –  Solo … together.  🙂 haha!

I decided to simply create a video with the photos. Enjoy gliding along Amsterdam’s waterways [with or without a lover]!

As you will see, many people live along the river and even on the river in house boats. Everyone here has at least 1 bicycle (or two, or three). In fact, there are about 5 times more bicycles than people in the city. True fact. This creates a problem when trying to find a place to chain up your bike. Often, you will see a bike just standing there, with it’s pedals locked.

Unfortunately, from time to time drunken/drugged up partiers think it is funny to throw bicycles into the canal. They say that an average of 1,000 bicycles are dredged up from the canals every year and sold at auction to pay for the dredging costs!

Amsterdam is so quirky and unique. I love it. – MoSop

Up Next – Our Final Tour Concert!…