Today marks day 10 of hospitalization in Neuro Rehab for Daughter A. Fifteen days ago she was suddenly unable to walk or move her legs. After ruling out all the major scary stuff that could be causing it, the doctors determined that the pathway between her brain signals and her legs was “blocked”, and would need time and therapy to try to “unblock” it. Since being transferred to the Neuro Rehab floor she has been tirelessly performing PT (Physical Therapy) and OT (Occupational Therapy) several times each day, trying to open up a line of communication between her brain to her legs, and remember how to move and walk again.

Each day, Daughter A is pushed in a wheelchair in-between two parallel bars. Then, her therapist puts a support belt around her and raises her to a standing position. While Daughter A holds tight onto the bars the therapist braces her and they see how long she can hold on and balance standing up before needing to be lowered back down into the wheelchair. Up and down, up and down she practices being able to hold a standing position. Eventually, two therapists will brace her and slowly move her feet and legs forward in a walking motion while she holds onto the bars. All of this work is done to remind the brain and legs of what they used to do effortlessly for the past 22 years. But, despite all this effort, she’s seen very little results.

Yesterday, for the first time, she was able to shuffle her feet forward a few steps all by herself – huge victory! She said her legs “felt really heavy”. She groaned about “looking and walking like Frankenstein” since she couldn’t bend her knees yet. But, no one was complaining. She was starting to show significant progress!

Last night her father and our home-teacher gave her a priesthood blessing. They anointed her head with a drop of consecrated oil, placed their hands on her head and pronounced a special blessing for the sick. In the prayer, she was told that the Lord was aware of her, and that He was “by her side” in this trial. She was promised many things, including that she would be “strengthened“, and that her body would “be made whole” as she “waited on the Lord”. She was reminded of the words of the prophet Isaiah:

“But they that wait upon the Lord shall renew their strength; they shall mount up with wings as eagles; they shall run, and not be weary; and they shall walk, and not faint.” – Isaiah 40:31

She went to sleep in her hospital bed that night with a smile on her lips and faith in her heart, “waiting on the Lord“.

This morning I allowed myself a little extra sleep. I went outside for a short run enjoying the fresh (cold) air and sunshine, and showered before driving to the hospital. When I arrived, Daughter A wasn’t in her room. I went to “the Gym” but she wasn’t there. Odd. 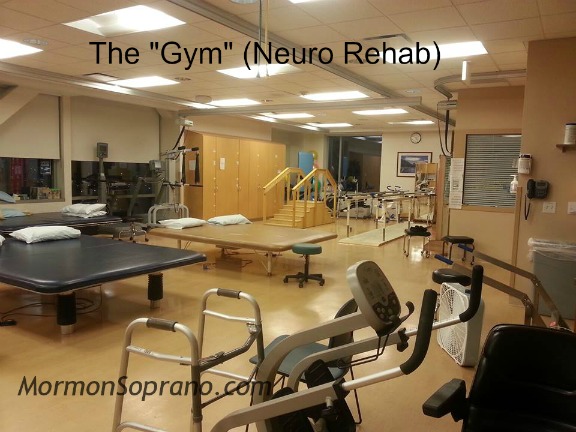 I walked back out to the hall and suddenly, there came Daughter A around the corner WALKING! No…not just walking…PRACTICALLY RUNNING INTO ME! I let out a stunned shriek of joy which startled her and she almost fell over! Thankfully, her therapist walking right beside her steadied her. She grinned and giggled and said “Hey, Surprise, Mom!” Then, off she went down the hall again with her PT keeping stride next to her. She was really moving! It looked like he almost had to jog to keep up. She yelled back over her shoulder “Sorry, I can’t stop! We’re on a mission to finish 10 laps around the entire floor  – we are going One Mile!”

OK. Yesterday, she was barely moving.

She returned to the Gym flushed with the effort and excitement. Her therapist made her try to walk slow – but she would completely teeter over. Then, he had her try to stand still – but, again, she’d sway and fall back down into her wheelchair. She told me she discovered that if she simply goes “really really fast” she can balance herself great. But, now she just needs to learn how to go “slow” and “stand” – (preferably without falling over). Ha!

She was given strict instruction from her elated therapist to go back to her bed and rest all night – she had no problem doing that since she was exhausted. She picked the movie IRON MAN to watch with me. We hadn’t seen the movie in years. At one point during the show, we both gasped and looked at each other – the lead character Tony Stark says:

“Sometimes You Have To Run Before You Can Walk!”

The Lord truly keeps His promises. He is working mighty miracles in all of our lives. My daughter is living proof of Isaiah 40:31. I can’t wait to see what happens next! – MoSop