In the Saturday morning session of October 2014 General Conference, Latter-day Saint apostle D. Todd Christofferson began his talk recounting a thought-provoking scene from Shakespeare’s King Henry V. In today’s “favorite things” post, enjoy watching a movie clip of that scene, as we study and ponder the epic message “Free Forever To Act For Themselves“.

I’m a huge lover of all things Shakespearean. I was raised on a healthy literary diet of all the classics, and beginning at age 8 I attended my first of many annual summer plays during the Utah Shakespeare Festival in Cedar City, a tradition which continues 40+ years and counting. (btw, my very first Shakespearean play was MacBeth, which made an indelible impression and lit the flame for my acting passion and love for boiling things). But, I digress…

During General Conference of The Church of Jesus Christ of Latter-day Saints it is common for speakers to use literature, plays, poems, and even movie and pop culture references in order to illustrate a spiritual message. On Saturday October 4, Elder D. Todd Christofferson began his talk titled “Free Forever To Act For Themselves” retelling this story from the bard.

“William Shakespeare’s play The Life of King Henry V includes a nighttime scene in the camp of English soldiers at Agincourt just before their battle with the French army. In the dim light and partially disguised, King Henry wanders unrecognized among his soldiers. He talks with them, trying to gauge the morale of his badly outnumbered troops, and because they do not realize who he is, they are candid in their comments. In one exchange they philosophize about who bears responsibility for what happens to men in battle—the king or each individual soldier…”

“At one point King Henry declares, “Methinks I could not die any where so contented as in the king’s company; his cause being just.”

His companion agrees, “Ay, or more than we should seek after; for we know enough, if we know we are the king’s subjects: if his cause be wrong, our obedience to the king wipes the crime of it out of us.”

Williams adds, “If the cause be not good, the king himself hath a heavy reckoning to make.”

Shakespeare does not attempt to resolve this debate in the play, and in one form or another it is a debate that continues down to our own time—who bears responsibility for what happens in our lives?

– D. Todd Christofferson, Free Forever To Act For Themselves, Oct. 2014

[side note: In the video clip, did you catch William’s use of the term “in the Latter Day” at 2:01? Yeah, just thought that was kind of cool]

Elder Christofferson uses this thought provoking story as a launching pad for us to ponder the spiritual principle of personal Moral Agency.

Who bears responsibility for our thoughts, actions and outcomes: God, or Us?

“God intends that His children should act according to the moral agency He has given them, “that every man may be accountable for his own sins in the day of judgment.”

Elder Christofferson states that “we should (and we do) rejoice in the God-ordained plan that permits us to make choices to act for ourselves and experience the consequences”.

More quotes from “Free Forever To Act For Themselves” 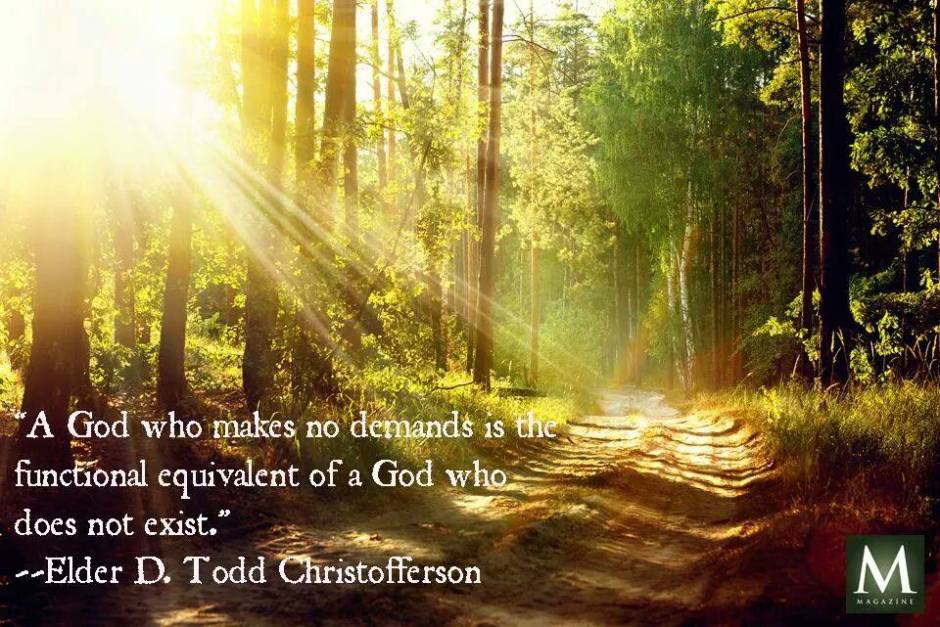 “To those who believe anything or everything could be true, the declaration of objective, fixed, and universal truth feels like coercion—“I shouldn’t be forced to believe something is true that I don’t like.” But that does not change reality. Resenting the law of gravity won’t keep a person from falling if he steps off a cliff. The same is true for eternal law and justice. Freedom comes not from resisting it but from applying it.”

“Justice is an essential attribute of God. We can have faith in God because He is perfectly trustworthy.”

“It is God’s will that we be free men and women enabled to rise to our full potential both temporally and spiritually, that we be free from the humiliating limitations of poverty and the bondage of sin, that we enjoy self-respect and independence, that we be prepared in all things to join Him in His celestial kingdom.”

WHAT THE GOSPEL OF CHRIST DOES IN CONCLUSION… A PROPHETIC PLEA

There is so much to ponder in this eloquent and enlightening talk!

I encourage you to read the full transcript here, or watch the video(s) below.

“Free Forever To Act For Themselves” Highlight Video

Click For: “Free Forever To Act For Themselves” FULL Video