In 1989 (the year Mr. Mo and I married) four young high school friends in Australia, who loved to harmonize and sing A’cappella together, were introduced by their Choir teacher to the sounds of American MoTown. The rest, as they say, is history! The boy band 4 Trax was born, later renamed Human Nature. A quarter of a century later those four men from ‘down under’ are still singing up a storm together and thrilling audiences with their tight harmonies and smooth moves. Human Nature has released 11 albums, with songs topping the charts in Australia, and beyond. Most recently, the group has been headlining in Las Vegas at The Venetian – with guest appearances by none other than MoTown legend Smokey Robinson. 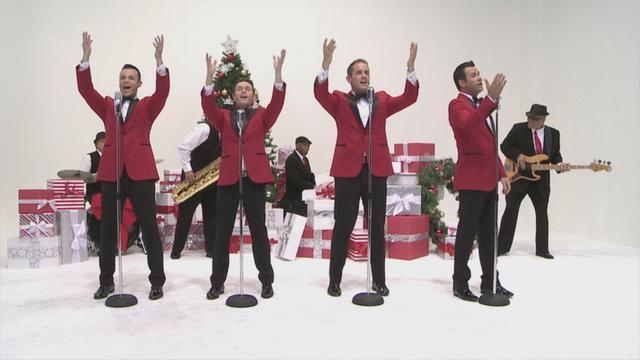 “There is such beauty in the original material,” says Phil Burton. “We didn’t want to make a carbon copy of the songs, but we didn’t want to change them into something they weren’t, either.”

Andrew Tierney is the one with the highest pitch, with his brother Mike and friend Phil Burton in the middle, and Toby Allen on the low notes. Each trade leads according to whose voice best fits the track.

“We wanted to keep the magic by maintaining the energy and fun. It was a learning experience to immerse ourselves into the arrangements, like taking a lesson from the masters.”

Their newest album is (appropriately titled for the season) “The Christmas Album.”

“It might sound funny to say about a Christmas album, but this record was actually really important to us,” Phil Burton explains. “We’ve been together for 24 years now, and one of the first things we did when we started out was sing Christmas songs together—performing on street corners in Sydney. So Christmas songs mean a lot to us, and we wanted to make sure this record was a genuinely great record– not just something we threw together because it happened to be the season for it.”

“Almost every year, we’ve been asked to do Christmas songs,” adds Andrew Tierney. “Something about the harmonies in our songs and the style of a lot of popular holiday music—they just seemed to go together.

This group was a new discovery for me. I’m totally enchanted with their sound and style! Listening to this music puts a smile on my face and a skip in my step. Plus, you just gotta love any group that can pull off those classic red jackets! Looks like a road trip to Vegas is in order soon. Enjoy! – MoSop