The Mormon Tabernacle Choir plays a unique role in the movie Singing With Angels, produced by Candlelight Media Group. It releases today – Friday March 11, 2016 – to select theaters across the USA. I attended a special screening Wednesday night shown to Choir members and guests.  It was a treat to finally see the end result from last year’s filming!

Here is my personal review. 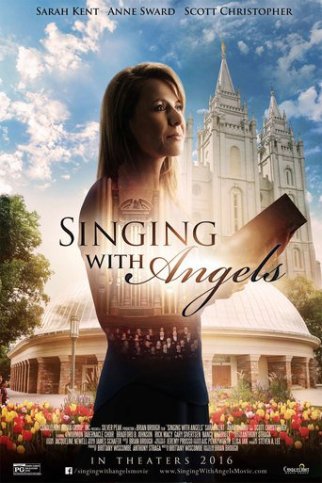 Singing With Angels is not a documentary about the Choir, nor a concert video (although musical selections by the Choir are inter-woven), it’s a story with actors playing fictional characters who interact with the Choir, as well as actors replacing some real-life people [such as the Choir’s president and music director].

Trivia: The last time the Mormon Tabernacle Choir was involved in a fictional movie project was the 1980 made-for-television short film Mr. Krueger’s Christmas starring legendary Jimmy Stewart. It was produced by The Church of Jesus Christ of Latter-day Saints.

Singing With Angels is the first time the Choir has been involved in a feature-length film produced by an independent movie company. The director, screenwriter and crew were given exclusive access to the Choir, and ability to film in Temple Square locations.  Over a year ago the film was successfully pitched to Choir president Ronald Jarrett and was then approved by the First Presidency of the Church. Filming began in early Spring 2015.

It was fun to have the opportunity to be a part of this film from the inside. Not only in the capacity as a member of the Choir, but also involved in some extra scenes (playing the role of “myself”), and even as a small contributor to the story line.

As part of the development of the script, Choir members were invited by the production studio to submit personal stories – including audition experiences, inspiring moments, trials we’ve endured and overcome, and the effects on family dynamics during Choir service. From all of those submissions stories were chosen and woven into the life of one fictional character.

All of the stories seen in the movie are “inspired by true events.”

From the opening scene we are introduced to the main character Aubrey (Sarah Kent),  and follow her personal journey of auditioning for the Choir, and her struggles and joys in life; her supportive husband (the lovable Scott Christopher), motherhood, financial worries, and dealing with a difficult mother-in-law (veteran actress Anne Sward).

Feeling like a star tonight at the premiere of #SingingwithAngels with actress Sarah Kent! Don't miss this feature film. It's really beautiful! #movies #motab #takekleenex 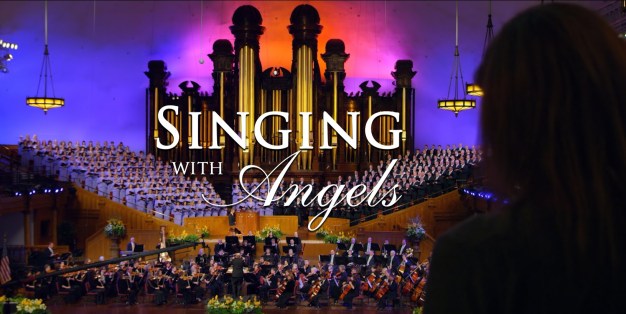 In conclusion, this movie is not likely going to win an Oscar (although an Oscar is really not a qualifier for an ‘exceptional movie’). It is refreshing, and increasingly rare these days, to find a movie with high moral standards, family values, and messages of faith, hope and love. I invite you to show your support for this genre of film, and go see Singing With Angels with your friends and family!