Authors Note: I am heartbroken and shocked that this pre-written story will publish on a day following a tragic shooting event in my beloved München. I have shed many tears. I offer my love and fervent prayers to all of my dear Münchner. May you feel loved, and find Peace and Healing!

If you read Day 7 then it will not be a surprise that Day 8 is a “Rest and Recovery day” for the Mormon Tabernacle Choir Europe Tour in Munich. Mr. Mo and I planned to sleep in.

This is why I found myself shuffling down to the hotel Breakfast Buffet at 7 am even after returning at 4 am from our epic Vienna undertaking!

A couple guys from Italy and I had the whole place to ourselves. Not a bad thing. But, when you are used to always being in a crowd, it’s a little eerie.

Sometime through my cup of German hot cocoa, another addiction I could easily embrace here (it is made from the grounds of dark cocoa beans – all you coffee drinkers got nothin’ on this) – I realized it was Independence Day back in the States. In Germany, today’s just another day. I smiled at the reminder that the good ‘ole USA is not the Center of the Universe.

After enjoying my personalized omelette, I took a walk over to the local grocery, Tengelmann. I can’t tell you how blessed I feel to be near a grocery and just to be able to pick up some fresh little snacks for our long rides, or some aspirin, etc. It may be small compared to USA standards, but they carry everything one really needs. And, everything is so fresh here. Their cherries are to die for. They also have an unusually large selection of cheese, yogurt, and meats. And, I’ve noticed our Choir group has practically cleaned out their chocolate aisle [yes, they have an entire aisle dedicated to European chocolate]. 🙂

Today is a special day that I have been looking forward to for several weeks. Prior to tour I signed up to participate in a Fireside program for a local LDS congregation. I was assigned to one of two Munich Firesides. I go tonight at 17:00!

Until then, since it is our last day in Munich, we decided we really should take the subway to the city center, brave the crowds of tourists [ugh!!!] and properly see historic Marienplatz. We marvelled at how clean the German subway system is. And Artsy. [Hey, New York City, you should take a few lessons here]. It was a quick and easy ride from our hotel to the Marienplatz.

In English, we call this city Munich. In German, she is München. And it’s citizens are called Münchner.

The historic Marienplatz [Mary’s Square] has been Munich’s central square since the year 1148. It has all the old-world charm you could expect of a Bavarian village. But, through the ages of has expanded to include modern influences. So, you may see a 13th Century church has the H&M store across the street, or a McDonald’s squeezed into a retrofitted Gothic pub. It’s at times charming and quirky. Sadly, on a crowded day you cannot walk anywhere here without being assaulted by cigarette smoke.

An observation: It seems ironic to me how advanced Germany is in energy efficiency, recycling and environmental protections, and yet so delayed regarding human protections from such harmful substances as tobacco and second hand smoke. However, they recently banned indoor smoking, so they are making progress!

We did enjoy exploring the sights, seeing the beautiful Cathedrals, watching the odd little street performers, wandering the open market, and discovering the Cuckoo Clock store. Ohhhhh my! I have always longed to have my own little Cuckoo clock! But, with the lowest price for the very tiniest clock over 500€, and the one that I liked being 2500€, I chose to take home photos instead!

We cannot forget the toy store! Ahhh, such a darling toy store! Germans are master toy makers. I fell in love with the hand carved wooden puppets. I really wanted to buy one – or twenty – but then my practical self said “Holly, what in the world are you going to do with a puppet? It’s just going to end up collecting dust in a box somewhere and be one more thing you have to pack when we move…” So, I took photos home instead.

I still feel a pang of regret now that I listened to my practical voice. When I look at that photo I wish I’d brought that sweet smiling granny home with me.

The Mariensäule [Virgin Mary column] was erected in 1638. 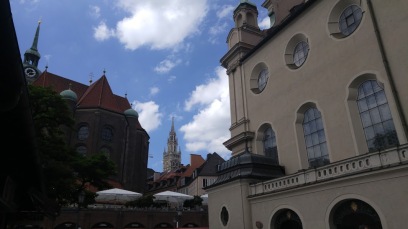 There are many churches and cathedrals 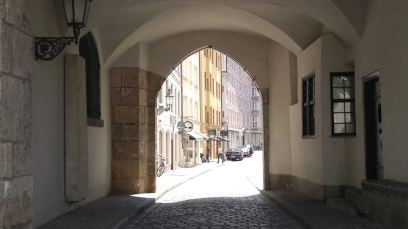 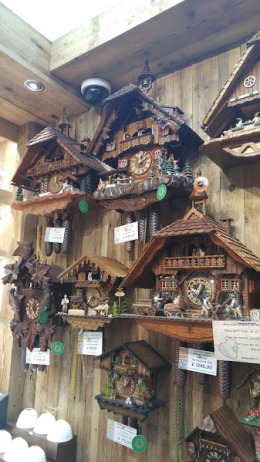 The one that stole my heart 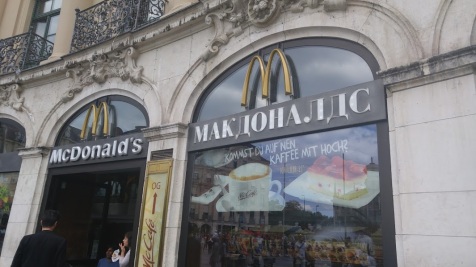 We just can’t escape this 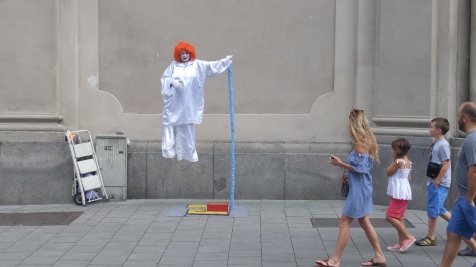 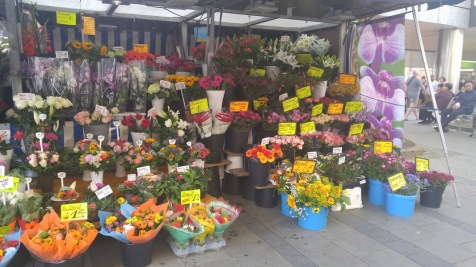 How did I resist that face?

Fellowship With The Saints

At 17:00 about 45 Choir members and a few guests loaded a bus for “Munich Fireside #1”. Space was limited, but Mr. Mo was blessed to receive permission to join us as a guest. I have been so excited about meeting the local LDS members in Germany! What a gift to be able to gather with them and share testimony with them through word and song.

As we traveled about 45 minutes to the chapel, Choir members warmed up our voices and rehearsed the hymns we would sing.

We arrived in a lovely suburb of Munich. It was heartwarming to turn the corner and see that beautiful LDS chapel on the street.

The local Stake President greeted us enthusiastically, and members welcomed us with big smiles into the chapel. The modest chapel has a lovely pipe organ, and a multipurpose room behind the chapel had been opened to accommodate the many people who continued to gather. It warmed my heart to see so many youth present.

Our program followed a standard outline for a church meeting. We sang arrangements of familiar LDS hymns for the opening and closing songs, and there were opening and closing prayers. Two choir members spoke sharing their stories and testimonies in English, with members of the local congregation providing translation for them. Two special musical numbers were provided in-between the speakers. Our Soprano choir sister Cheri sang a lovely solo, and her talented husband Rob played a piano solo.

After our two speakers, a few of our group who speak fluent German stood and briefly shared their testimonies in German.

The Spirit of God was present, and there was not a dry eye in the room. In conclusion, we closed with the beloved hymn we close all of our concerts with. But, for this tour, we have learned to sing it in German – “Gott sei mit euch” [God be with you].

Again, there were many tears.

Mr. Mo was seated in the audience enjoying the meeting. At the conclusion, a teen aged German boy seated next to him turned and said slowly in English, “Thank you very much for coming.” Then, placing his hand over his heart with tears in his eyes the boy added in a sincere voice;

“There are no words for my happiness.”

Before we could leave, the Stake President leaped to the pulpit thanking us for coming, and said “You have all given us something so sweet, we thought we could give you something sweet in return.”
His two sons arrived carrying a box filled with German chocolate bars for each of us!

We lingered outside for as long as we could, which wasn’t very long, hugging, visiting, taking photos and enjoying fellowship with these sweet brothers and sisters. We discovered that a couple in the crowd had very familiar faces! They had been to Salt Lake City last year on their honeymoon and were invited to sing as guests with us during one of our Thursday night rehearsals. We remembered each other! What a joy to see them again, and to now be guests in their ‘choir loft’!

As we boarded the bus and began to pull away, our last images were of these beloved new friends with smiles on their faces, waving a fond farewell to us! Our hearts will forever be bound together in love and fellowship.

This experience in Munich will forever remain one of my most cherished memories from the tour.

I love you, my dear Münchner! There are no words for my happiness.

This is part of a 3-week series sharing my experience during the Mormon Tabernacle Choir’s European Tour from June 28-July 16, 2016. Due to security concerns, tour participants were not allowed to share anything on social media until after our return.

An historic day on Sunday 24 October 2021! After nearly 20 long months, The Tabernacle Choir, Orchestra and Bells at Temple Square combined together In Person to perform LIVE again the weekly TV special Music & The Spoken Word!
I reached the top of Paintbrush Divide, 10,720 feet in the Grand Teton Mountain Range! This month I am hiking in support of Mental Health Awareness and Suicide Prevention with the #46Climbs organization @46climbs
Watching a new fire develop in the Lambs Canyon area!! 🔥 🔥 So sad!! It's spreading quickly. I hope the fighters can get it out quickly. #Utah #fire #parleyscanyon #lambscanyon
View from Francis Peak above Farmington #Utah, looking down to the valley floor. We should be seeing houses, streets, farms, the Great Salt Lake and Antelope Island in the distance. But instead all we see is a thick cloud of wildfire smoke coming all the way from #California and #Oregon. 😥
Met this beautiful guy on a 7-mile hike near Francis Peak.
Congratulations Team USA Women's Volleyball!! YOU ARE PURE GOLD!! 🏅#teamusa #tokyo2020 #live #teamusawomensvolleyball #goldmedal #firstever #soproud
I've got a LOT of catching up to do! Here's a little montage from our very first overnight backpacking adventure in May 2021! This was supposed to be a 15 mile out-and-back up Farmington Creek Trail. As you will see, things started out great, but didnt end as planned!!!
I received my 1st dose today! #covid19vacccine One more arm for mankind! One step closer to reaching herd immunity, and the end of this devastating pandemic. Thank you to all of the tireless, selfless volunteers who are so helpful and cheerful organizing this massive effort! There is a very tangible feeling of HOPE and EXCITEMENT in the air!
My favorite! [and the trumpet... Chef's kiss!] #berniememes