We arrived from Zürich to Frankfurt, Germany in the wee morning hours and stumbled off the bus, up an elevator and into our room. We are on the 26th Floor, of 44. So, we had an idea this was a much bigger city than we’ve seen so far.

However, by morning light we didn’t expect such a stunning, and dizzying view. I had to back away from the window a little bit. 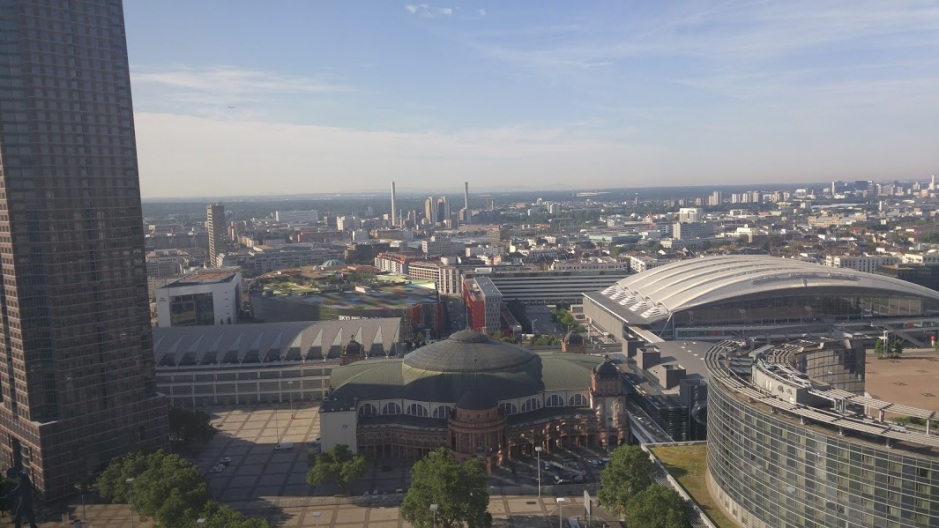 I don’t like being this far away from solid ground. It gives me too many flashbacks of the Towering Inferno movie, and 9-11…

But putting my neurosis aside, it’s a very nice room. Modern and comfortable. Other than the air conditioning [of course] which perpetually seems to be fixed in these hotels between 75-80 F with no way to make it cooler. But hey, the window opens if you want some “fresh air”…

Today is a REST DAY, and that’s what we did. We slept in until noon [don’t judge – that only meant we got 8 hours of sleep]. The hotel is graciously providing WiFi to our room here, so we played catch up on email.

I have to admit, I’m exhausted. I don’t feel like going outside or sight seeing or doing anything “productive”.

I probably would have stayed under my covers all day if I hadn’t discovered that my FitBit [a step counter / micro fitness device] was missing.

After tearing the room apart, and then using the “find my FitBit app” we confirmed that it is gone forever.

My FitBit was clipped to my bra before my concert in Zürich. So, it must have fallen off when I was quickly changing and rushing to the bus. By now, I’m sure it’s in a trash bin somewhere in the Hallenstadion.

If you own a FitBit or another step tracking device then you will probably relate to my panic. If not, then it’s a little hard to explain. Mr. Mo and I have both owned a FitBit for the past 4 years. We have a lot of friendly competition over how many steps and floors we log each day. Plus, with our online accounts we have other friends that we compete with. It has become a very motivational daily way to track fitness activities and calories burned, etc. But, I admit, it’s like a healthy addiction. Yes, I could technically keep living without it. But, the thought of going the remainder of tour without one – thus, not getting any credit for all my steps and activities? Horrifying.

The good news is that since we are now in a huge city we have a huge shopping mall nearby. We can even see it from our window. It’s the building with a bunch of colorful Astro-turf on its roof two blocks away.

Maybe I could even find a replacement FitBit? So, off we went.

Frankfurt am Main is the largest city in the German state of Hesse and the fifth-largest city in Germany. The 2015 population was  731,095 living in its business center. The urban area surrounding the city is called Frankfurt Rhein-Main with a population of 2.2 million. And the entire “Greater Frankfurt Region” has a total population of 5.5 Million. This is why Frankfurt has been dubbed the “Mainhatten of Germany” – a play on words to New York’s Manhatten.

It is a big, busy, loud, modern city. With skyscrapers, banks and financial consulting firms on every corner. The city is also host to the largest World Trade Fairs. Who knew? I didn’t until now. But, it makes sense. During WWII this city was heavily bombed until there was hardly anything left. The Germans bounced back by creating a modern business hub. What it lacks in “old world charm” it tries to make up with commercial success. 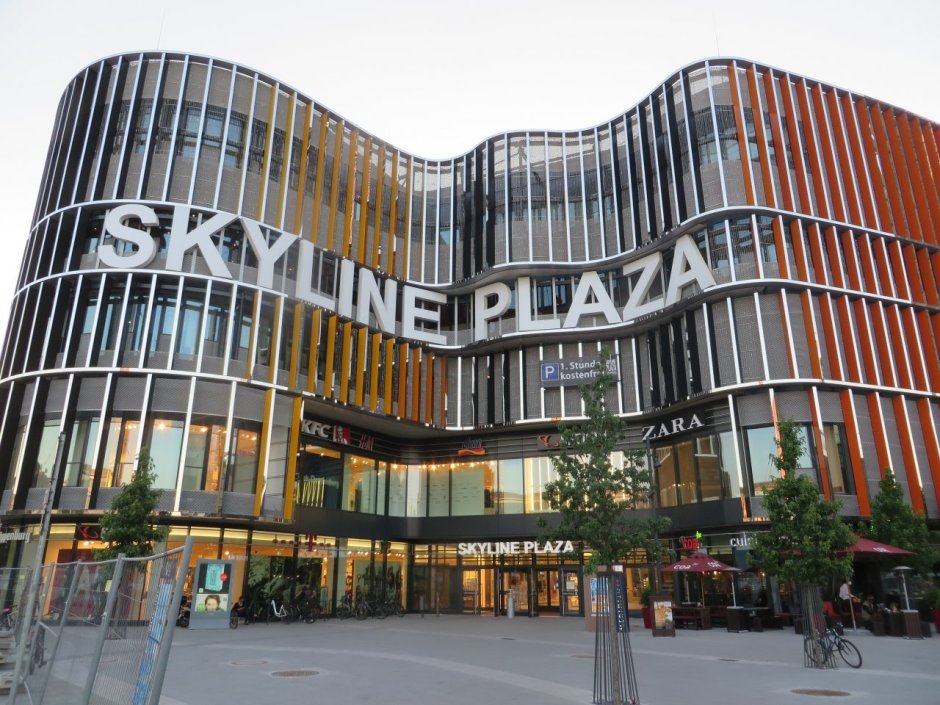 The weather is hotter and more uncomfortable today. Thankfully [blessedly!] the Skyline Plaza is like a refreshing American oasis! Not only are there many familiar shops here, there is “real” air-conditioning inside! [but no drinking fountains. That’s too American] 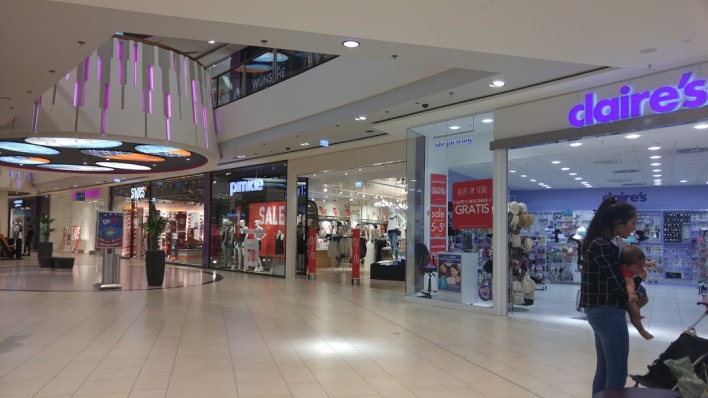 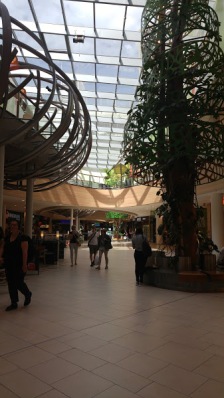 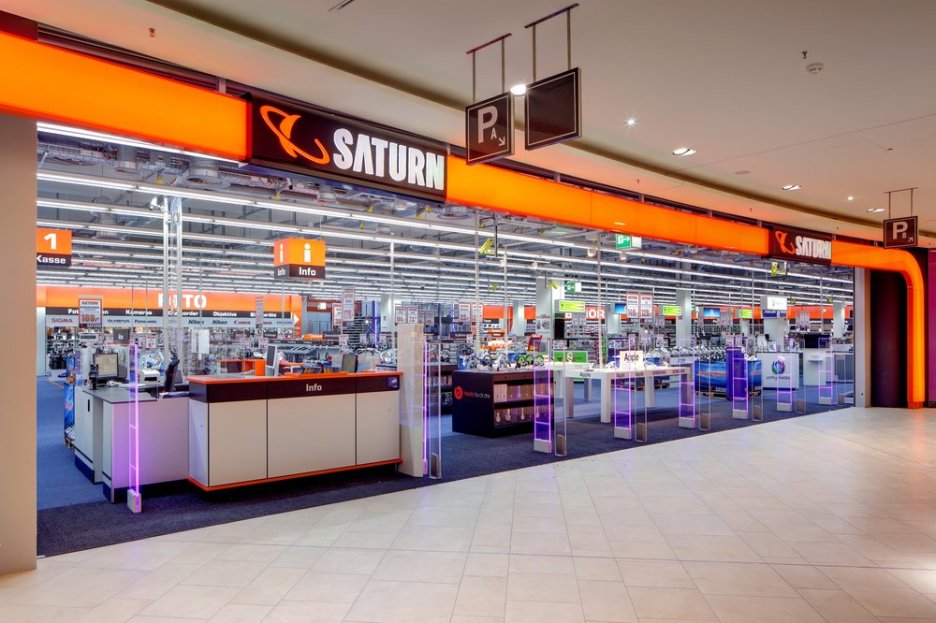 This is where we found the Saturn store – which is to Germany what Best Buy is to Utah. And, guess what? After wandering around far too long [because unlike America, there aren’t any salespeople eagerly trying to annoy or help you] we found a FitBit One! 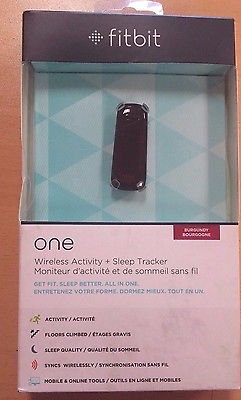 And thus ends my tale of “How I made my most expensive European purchase“.

Ridiculous. I know. But, I feel so relieved to be wearing a FitBit again.

Meanwhile, we decided to wander the huge Mall. We probably didn’t see half of it. It’s four stories high – five if you count the rooftop dining area – and there’s even a grocery store inside. Which we visited. We bought a few items for tomorrow’s bus ride. And chocolate. Because, when you find chocolate in Europe, you must buy it. That’s the unofficial #1 MoTab tourist rule.

Skyline Plaza is almost how we ended up in the hospital.

I am still having nightmares about this part of the day because it was so stupid.

We had gone to the second floor and visited a few shops. Then decided to find an escalator on the opposite side to take us to the exit. I was vaguely aware of a man from the Saturn store pushing a dolly heavily loaded with large boxes. I watched him several feet ahead of us get onto the escalator headed down. I remember a tiny voice in my brain saying “that’s weird” but I didn’t stop to think about it. A woman got onto the escalator a couple steps behind him, and then … we very stupidly followed. 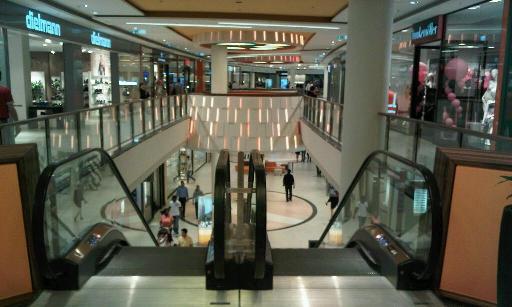 A guy several steps behind Mr. Mo tried leaping up the stairs backwards, but there were more people above him so that he couldn’t get around. Now I’m panicking. There is screaming in multiple languages…. and I feel like I’m being crushed. Box Man still cannot move his stupid dolly or his boxes!

SOMEHOW the girl in front of us – motivated by sheer fear and fury – squeezed around the dolly and the boxes and pushed herself free. That allowed me to follow although tripping off the escalator, and Mr. Mo followed close behind, picking me up.

How could that guy be so STUPID to get on an escalator with a dolly and all those boxes?!?

WORSE… How could WE be SO STUPID to FOLLOW him?!?

It’s a miracle we got out alive and unharmed – other than a bruised ankle for me and a small scratch on Mr Mo’s leg.

The same time we were falling out of the escalator, Box Man managed to push his mess far enough off for everyone else coming down the escalator to exit. I didn’t see what happened after that. We hurriedly exited Skyline Plaza and walked swiftly back to our hotel. End of story.

So often we are just wandering through life, distracted by all the colorful sights and sounds, feeling perfectly comfortable, happy, oblivious to any danger signs. That’s when when we are most in danger. If we do not stay alert – if we do not pay attention to what is going on around us – if we do not listen to that little voice in our head that says “that’s weird” and stop  to think about why we feel something is not right – then we might follow someone who is using terrible judgement.

We might follow someone who is lazy and stupid. Someone who does not have our best interests at heart.

And then, we – and many others – could end up seriously harmed.

There’s our lesson for the day.

I’d also like to thank our guardian angel for another Tour Miracle.

We ate a quiet dinner in the hotel restaurant, and this is where I would like to say we went to bed early like responsible adults.

But, guess what? It was ANOTHER SOCCER CUP TOURNAMENT NIGHT!

How could we miss that? And, Germany was playing France. Oooh…. now that’s a big rivalry. Mr. Mo was rooting for France this time – of course! He served his LDS Mission in Belgium and France and is a proper Francophile. I’m neutral on who wins, I just want an exciting game like we had in Munich with overtime and a  shoot-out, and screaming fans!

We sat in the lobby near the  big screen TV with several other people gathered around. I had a German couple sitting on my left, and on my right was Mr. Mo and 3 tipsy Frenchmen. That was funny! I wondered if I was going to have to play the role of a referee if tempers ran high? Unfortunately for the Germans, the night didn’t bode well for their team. They were very stoic. They drank their beer quietly, and didn’t make a sound. Meanwhile, the Frenchmen were very passionate and vocal. There was loud jeering when Germany got the ball and even louder cheering and slapping high fives when their team got the ball – and huge cheers when they made a goal. In the end, the night went to the Frenchmen.

And, Mr. Mo made some new buddies . 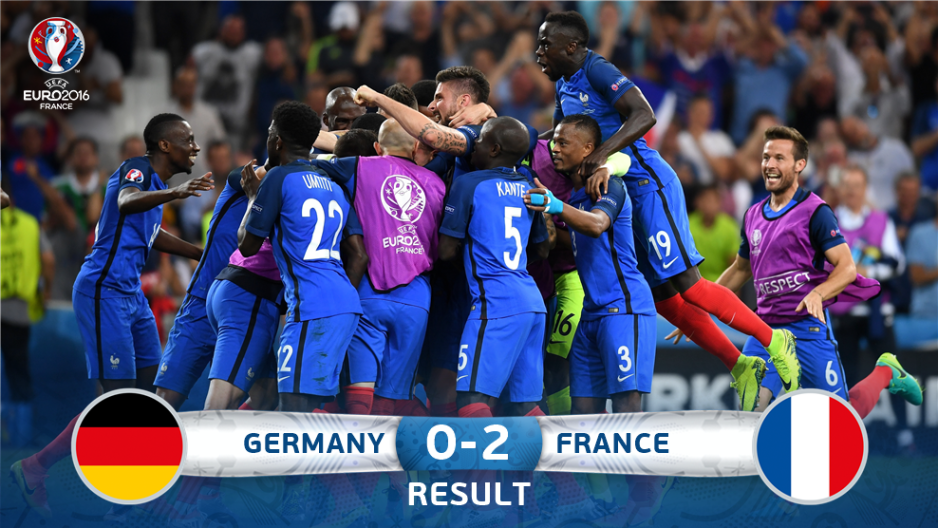 Tomorrow is another “excursion” day where we will be seeing the famous Rhine River on our way to another castle!