A phrase struck me this morning while reading a New York Times article, and has been running through my mind all day. It was embedded in an article detailing how the latest Trump Tax plan would shift trillions from U.S. coffers to the nation’s richest.

Law professor Edward Kleinbard offered a laundry list of supporting reasons – including repealing of the estate tax, reducing the rate on capitol gains, repealing alternative minimum tax, and a repeal of the Affordable Care Act’s 3.8 percent surtax on the investment income of high earners, put in place to subsidize health coverage for low-income Americans…

…and his haunting conclusion:

“These are all afflictions of the affluent”

I’ve been ‘ponderizing’ that fascinating alliteration. I thought I would share some of the resulting questions and musings with you today.

Growing it.
Keeping it.
Losing it.

A million dollar question!
Surely, there is an inherent truth that it’s not actually how much money someone has amassed, but how one chooses to use it which decides their destiny.

Although, a very wise man once taught that it’s just about as easy for someone to successfully squeeze a camel through a tiny door, than choose to use money for holy purposes. 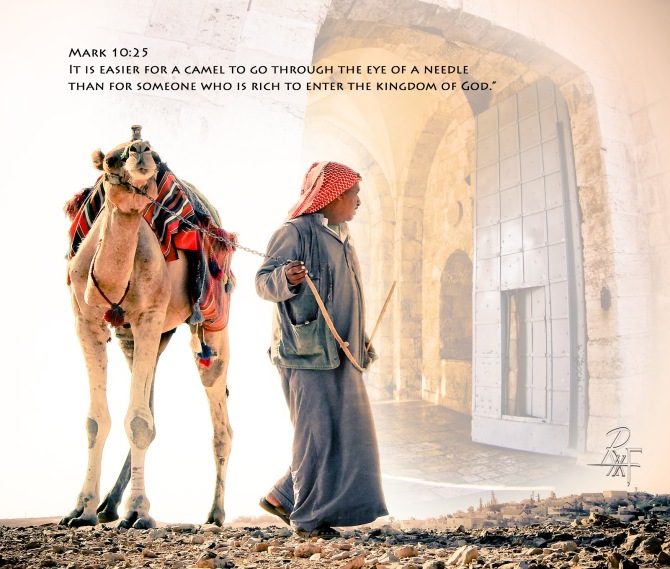 How do we cure the “curse of cash”?

Its simple. Using our wealth, time, talents, education and abundance to selflessly save, teach, help, lift and bless other human beings is the greatest remedy for greed-born afflictions.

God thinks so, too.

The New Testament relates a story of “the rich young ruler” who humbly approached Jesus with a sincere concern. This was a very good young man. He upheld the laws of the land and the laws of God., and we can surmise he had made good choices throughout his life since he was a little boy. He yearned for the righteous desire of eternal life, and came to The Master with his honest question – “what lack I yet?”

Jesus said unto him, “One thing thou lackest. If thou wilt be perfect, go and sell that thou hast, and give to the poor, and … come and follow me.”

The young man was stunned! He had never considered such a sacrifice. He was humble enough to ask the Lord for guidance, but he was not faithful enough to follow the divine counsel he was given.

Certainly, wealth is not exclusive to imposing social, emotional and spiritual perils! Poverty offers plenty of “afflictions” beyond the physical. We can be sure that Satan has a plethora of plans at his disposal to corrupt us, no matter which side of the economic track we’re standing.

But today we explore the “Afflictions of affluence“.

I suppose the way today’s lesson applies to each of us, is up to each of us. There remain more questions to ponder.

If the Bible teaches that those of us who have been blessed with abundance should share with those who have less, then why are the “conservative majority” of Americans opposed to the idea of taxing the rich to help the poor?

Which is worse, a rich man refusing to share his “hard-earned” wealth? or, a poor man angrily expecting a “free handout” without “contributing to society”?

These are rhetorical questions which stir up arguments as old as time. Yet, no account has Jesus stipulating the rich young ruler should go and give his wealth to only the “deserving” poor.

Framed within the Christian gospel perspective, one must ask,

Is Trump’s latest Tax Plan [or any other plan which profits the rich and harms the poor] really “what Jesus would do”?

It seems even the poorest among us are schooling the rich.

I have never considered myself a “political junkie” nor an “angry activist.” I live in a solidly conservative “red” state. For better or worse, I’ve always been a registered Republican. Although, I’ve established I’m really an Independent at heart who regularly votes “across party lines” [shocking! I vote for people, not parties]. It seems that with time, age and the rapidly changing ideals of our culture, my perspective has also been evolving, my mind is broadening, and hopefully my character is deepening. As far as I’m concerned, this world could use a lot more thinking, ponderizing, and anger management – and a lot less snap judgement, instant gratification and stupid games.

It is so easy to fall into the trap of catastrophizing our national and global state of affairs. We live in a very challenging, and increasingly alarming era. It is definitely not “the best of times!” But, a quick glance at history books should remind that we haven’t reached “the worst of times” yet.

I think we stand at a crossroads. Right now. You and me.

On the one hand, we could easily slide into normalizing dishonesty, condoning crime, and accepting moral ruin. It’s an easy well-trod road, paved with sparkling fools gold. On the other hand, we could take the isolated, uncomfortable and slippery path that demands a daily upward climb defending democracy, wrangling intolerance, and protecting human decency. It’s not going to be easy, but I hear there’s a breathtaking view at the top.

What path will you choose? – MoSop