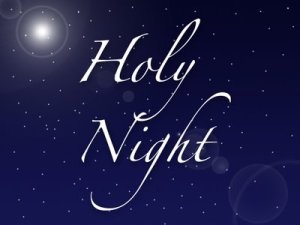 On Christmas Eve 1906, a 33-year-old university professor, and former chief chemist for Thomas Edison, named Reginald Fessenden did something long thought impossible. Using a new type of generator, Fessenden spoke into a microphone and, for the first time in history, a man’s voice was broadcast clearly over the airwaves:

“And it came to pass in those days, that there went out a decree from Caesar Augustus, that all the world should be taxed…,”

He began in a clear, strong voice, hoping he was reaching across the distances he supposed he would. Shocked radio operators on ships and astonished wireless owners at newspapers sat slack-jawed as their normal, coded impulses, heard over tiny speakers, were interrupted by a professor reading from the gospel of Luke.

To the few who caught this broadcast, it must have seemed like a miracle. Some might have even believed they were hearing the voice of an angel. After finishing his recitation of the birth of Christ, a second miracle took place. Fessenden picked up his violin and played “O Holy Night,” the first song to ever be sent through the air via radio waves. Music had found a new medium, and the world would never be the same again.

The Christmas song “Cantique de Noël” has a fascinating history. A parish priest in Roquemaure, France commissioned the poem from Placide Cappeau. Mr. Cappeau enlisted the musical talent of his friend, the opera composer Adolphe-Charles Adam. The song was first performed for Christmas Mass, 1847 in Roquemaure. It took the American continent by storm during the Civil War, becoming an anthem of sorts for the abolishonist movement, due to the English translation of the final verse:

Truly He taught us to love one another,
His law is love and His gospel is peace.
Chains he shall break, for the slave is our brother.
And in his name all oppression shall cease.

Over the centuries, this Christmas song has been sung millions of times, in hundreds of languages. The carol has also gone on to become one of the entertainment industry’s most recorded and played spiritual songs.

Requested by a forgotten parish priest, written by a poet who would later split from the church, given soaring music by a Jewish composer, and brought to Americans to serve as much as a tool to spotlight the sinful nature of slavery as to tell the story of the birth of a Savior –“O Holy Night” has become, in my humble opinion, one of the most beautiful, inspired pieces of music ever created.