The Russian Count Lev Nikolayevich Tolstoy (1828-1910) , commonly known as Leo Tolstoy, is considered one of the world’s greatest novelists. He is best known for two [very long and epic] novels, War and Peace (1869) and Anna Karenina (1877). Tolstoy was born into a life of high society and privilege, but was humbled through witnessing war and having several other traumatic experiences. He became a devout follower of Jesus Christ, particularly influenced by the Sermon on The Mount. Tolstoy passionately believed that a true Christian would find lasting happiness by continually striving to follow the two-fold ‘Great Commandment’; to Love the God with all your heart, might, mind, and strength, and to love your neighbor as yourself.

Today I am sharing a beautifully animated excerpt of one of Tolstoy’s beloved short stories “Where Love Is, There God Is Also” (or, “The Old Shoemaker”). The video highlights the last part of Tolstoy’s story, where the humble old cobbler waits all day for the promised visit of the Savior, only to discover that by helping those around him, he has already received the Savior.

I absolutely loved reading the entire Russian translation (found online here). It’s such beautiful storytelling. And, although the ending of the story is so heartwarming and inspirational (as shown in the video), I was especially moved by the beginning of the story when we meet Martuin (Martin) the shoemaker – a good man that has crumbled inside after suffering tragedy after tragedy, losing one by one those he loves the most, suffering heartbreak, and the emotional tidal waves of grief. All of the light has been sucked out of Martin’s life, and it seems to him that the only thing left to live for is death.

In that broken, desperate state Martin is visited by an old “fellow countryman” who has noticed that his friend has been missing from society, and travels to see him.

“I have no more desire to live,” Martin said: “I only wish I was dead. That is all I pray God for. I am a man without any thing to hope for now.”

And the little old man said to him- “You don’t talk right, Martin: we must not judge God’s doings. The world moves, not by your skill, but by God’s will. God decreed for your son to die-for you-to live. Consequently, it is for the best. And you are in despair, because you wish to live for your own happiness.”

“But what shall one live for?” asked Martin.

And the little old man said, “We must live for God, Martin. He gives you life, and for his sake you must live. When you begin to live for him, you will not grieve over any thing, and all will seem easy to you.” 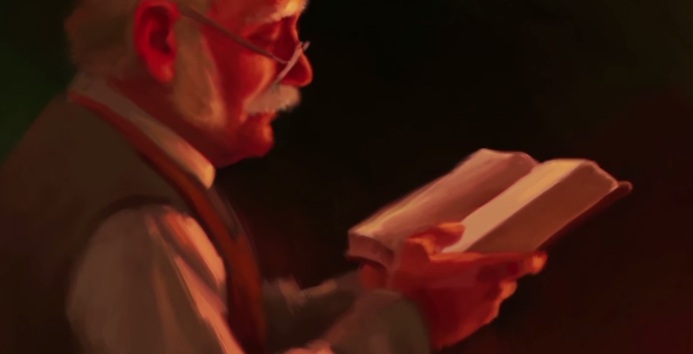 “And he went that very same day, bought a New Testament in large print, and began to read.”

The shoemaker purchases a New Testament of the Bible which his friend encouraged him to do. He ponders and prays over the things he reads. We begin to witness his change of heart, and emergence into light. I suspect Tolstoy must have drawn upon his own conversion process as he includes such intimate details in the shoemakers conversion.

“And the more he reads [the Bible], the more he understands, and the brighter and happier it is in his heart.”

I love that Tolstoy has the wisdom to tell a story that does not take his character smoothly from A to B to happily ever after. Oh no, this story is very rough and raw – heartbreaking – as his character descends into the darkness of despair. Many authors are very good at getting their characters into trouble. What makes Tolstoy the master of his craft, and what makes his tale so believable, is the painstakingly detailed, true-to-life process of getting that character out of trouble. The process for his characters transformation is what it would be like for a real human being – gradually, haltingly, imperfectly, with stops and starts as they gain a little more understanding, a drop more of light, a handful more of hope, until they are changed and find peace. Tolstoy allows his readers to walk beside his character through that process, to read and ponder the same scriptures with his character, to say the same prayer, and, in a very real sense, to experience our own change of heart and conversion along with his character.

To me, the most intriguing and heroic character in this story is overlooked because it is not actually the main character (cobbler Martin). It is the “little old man” without a name who comes from a far distance to seek out a friend in need. He decides to travel a far distance to find a person that he has not seen in years. But, something must have stirred up inside him to make him feel the importance of going, and he follows that prompting. For all he knew, after he walked all the way into the countryside, Martin might not even be home. Or, in his hopeless grieving state he might not even feel like getting out of bed and answering the door. Maybe he wouldn’t want to see him? Maybe he would refuse to talk to him? … But, the little old man doesn’t worry about himself, or the problems he might face, he simply goes. He puts his trust in God completely to be able to know how to help a soul in need. When the little old man arrives, he listens attentively to his friend’s sorrow, and when the moment is right, he doesn’t judgmentally ask him why he isn’t coming to church, he doesn’t trivialize the moment and talk about the weather – he gives loving, personalized, soul-to-soul advice. He shares his faith and testimony and he encourages his friend to just try doing what he does to feel joy; reading the scriptures, and praying. And because of that one little old man who was willing to seek out his lost friend, a life was saved. But, you never save just one life when you save a soul. Because the positive ripple effect goes on and on for eternity.

Tolstoy paints a beautiful literary masterpiece showing how the light of the Savior can enter into all of our lives through the goodness of others.

There’s so many great lessons and good messages to ponder in this small, timeless tale! Enjoy the video, and when you have about 30 minutes, read the full story by Tolstoy, here. Enjoy! – MoSop