I’m officially gardening again! According to the Farmer’s Almanac (i.e. people that garden who actually know what they’re doing) it’s considered “safe” to plant after Mother’s Day – which really means I can’t procrastinate any longer. I’ve been putting it off mainly because every time I think “OK. This is it. Tomorrow morning is the day!” inevitibly it would be pouring rain. And, since I’m a fair-weather gardener, I declined the option of wading in a mud pit trying to plant. So, I waited. Then, whenever the weather was perfectly lovely I was busy working at the office or singing with the Choir. And so it went – until today – my official day of “I have to plant something in the ground this weekend or else it’s never going to happen”. Of course that meant that when I woke up and looked outside, guess what?! Yes, pouring rain. Again.

Some people jinx the weather by washing the cars, I apparently jinx it by wanting to plant my garden.

[Of course, this is in answer to diligent fasting and prayer by my LDS Stake – so I can’t really complain about a Gift from God]

Nevertheless, I decided I would not be deterred any longer! Off I went to buy my plants. I love the Lawn and Garden store. It’s huge! Someone could probably get lost in all of those acres of rows of plants and greenhouses out back. The rain was keeping away the hordes of crowds, and it seemed to be enhancing the fragrance of all the vegetables, flowers and herbs. Ahhhh! So relaxing. 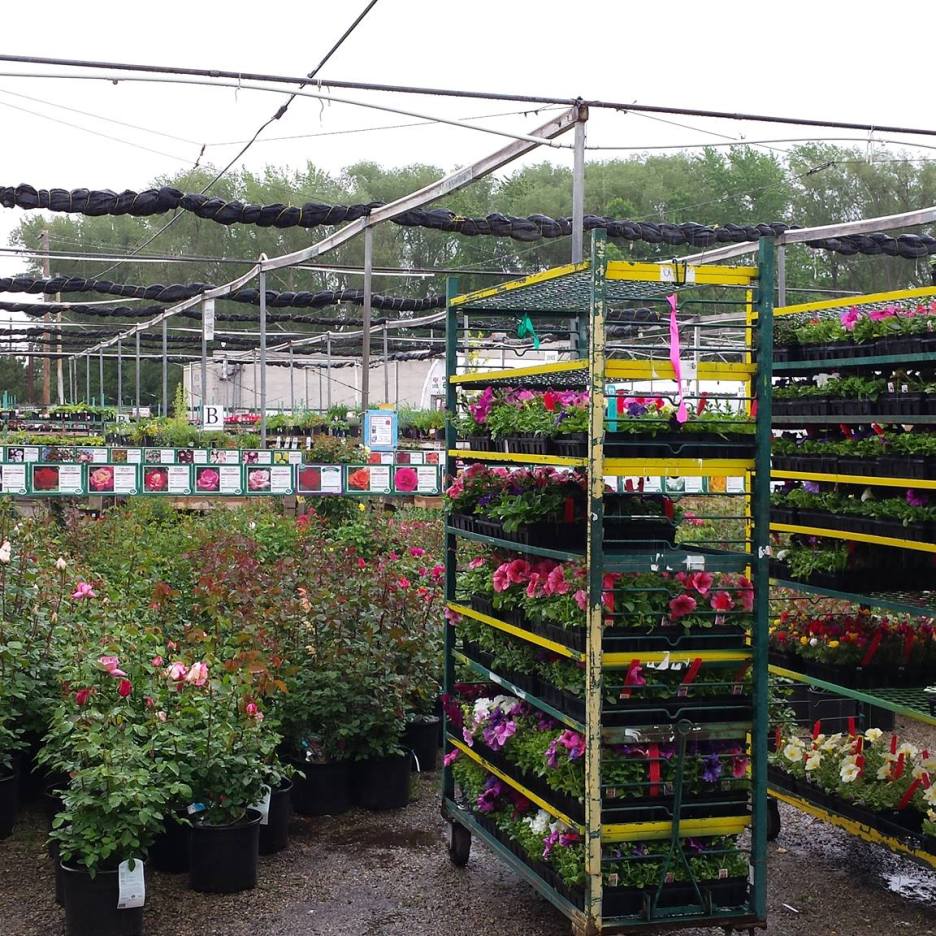 Rows and rows of flowers 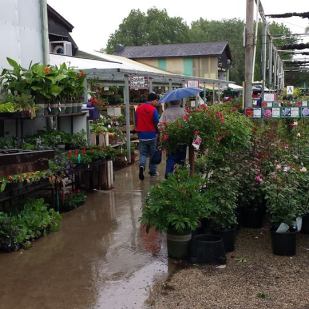 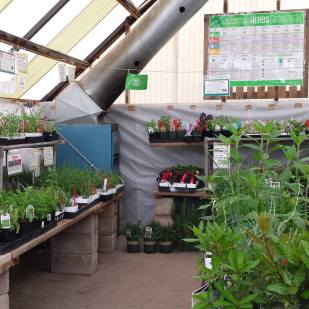 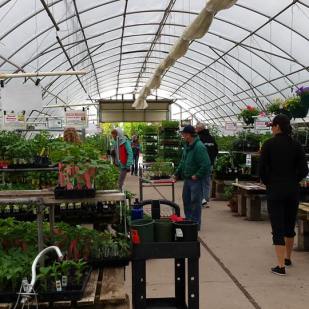 The Peppers and Tomatoes Greenhouse

I started putting all kinds of lovely things in my cart and before long I’d collected much more than my budget allowed.

Right about then I realized that with the continual downpour that had started last night and was showing no sign of stopping I was going to have to hold off slogging around in our community garden plot. But, now what? I had spent the last hour carefully selecting all the most lovely plants and I didn’t want all my time and effort going to waste! Hmmm… what to do, what to do? ….

I pushed my cart inside the building and wandered asiles of seed packets, gardening tools and plastic lawn ornaments (yes, they had flamingos and gnomes). I chose a nice pair of waterproof gardening gloves. Then I noticed an interesting display of “box gardens”. I was intrigued with the promises of being easy and foolproof, and I really liked the idea of having a container of fresh veggies just outside my kitchen door instead of 8 miles away in the community garden. 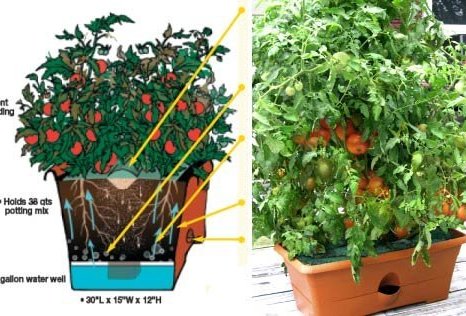 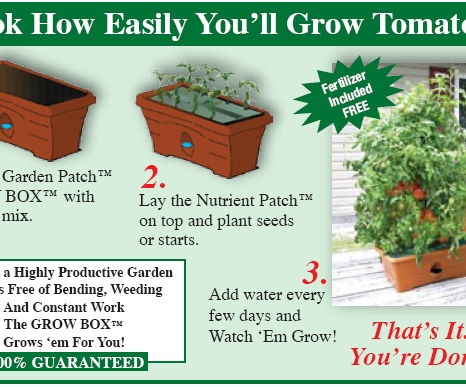 I succumbed to buying two of the boxes (they were on sale). I reasoned that this would be a great way to accomplish my planting for the day and I could do the whole thing on my covered front porch without getting wet. Voila! Next weekend (or sooner) I’ll go to the community garden and plant larger veggies that need room to spread out – like zucchini or cantaloupe.

The box garden turned out to be fairly easy to put together just like the packaging promised (except the snapping it together phase, which took a lot of extra pressure and in the end, a hammer). Here’s the process. 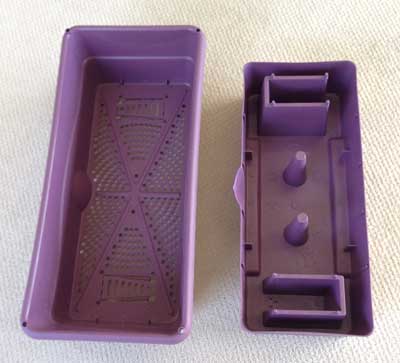 Step 1: Snap the bottom and top together 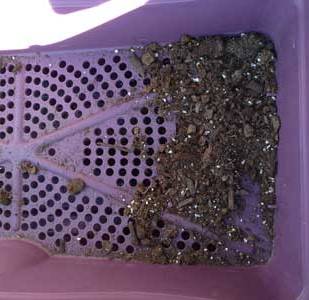 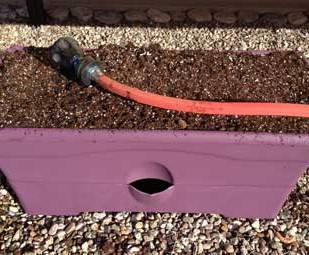 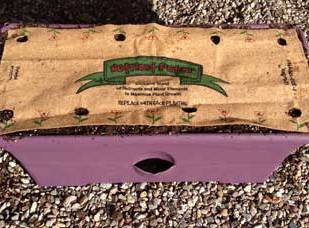 Step 4: place the fertilizing cover over, and cut out the numbered slots per the instructions. (then plant your starts underneath)

And here’s the final result! (I actually love the eggplant color of the box. It was either that, or florescent lime green. I think I chose wisely)

Excited for my Garden Patch Grow Box! #veggies #gardeninabox #whereIam #ShareGoodness This is an all inclusive gardening system that was on sale at my local nursery I couldn't resist. It can fit in any small outdoor space. I'm using my sunny front porch for these sweet and salsa peppers. I have another box with cherry and roma tomatoes. It was super easy to snap together, fill with mix and add the plants. The container includes all the nutrients needed and is even self watering. You simply "plant by number" and watch it grow (#hopefully) I'll let you know how this turns out. 🙂

The containers are self-watering. They hold 4 Gallons in the base and you simply have to keep them filled and it absorbs up into the roots. I was glad to be planting under cover, but it actually got so cold at one point I could see my breath! And, it NEVER stopped raining. Crazy weather. Six hours later it’s STILL raining. In fact, it’s predicted to rain until Tuesday. Wow.

Meanwhile, I felt so ambitious I even planted flowers in the front walkway containers. Then I came indoors and spent the next two hours trying to warm up. It is NOT supposed to freeze tonight (remember, it’s “safe” to plant after Mother’s Day, right?). I’m feeling very pleased with myself. Now, let’s hope I can keep them alive. I’m looking forward to being able to pick fresh peppers and tomatoes right from the vine for dinner. 🙂 – MoSop

I feel a song coming on…