Tonight beloved LDS apostle Elder L. Tom Perry lost his brief battle with cancer. Four weeks ago it was announced he was getting treatment for cancer. Yesterday it was announced that despite treatment, his cancer had metastasized to his lungs, and he was entering hospice care. There’s been an outpouring of love and expressions of compassion and kindness online, and I also noticed the most common hope and prayer expressed over the past 24 hours has been that Elder Perry would not have to suffer long.

The Lord heard those prayers and granted a tender mercy. Elder Perry died peacefully this evening – passing to the next world only a few hours after his hospice care had begun. 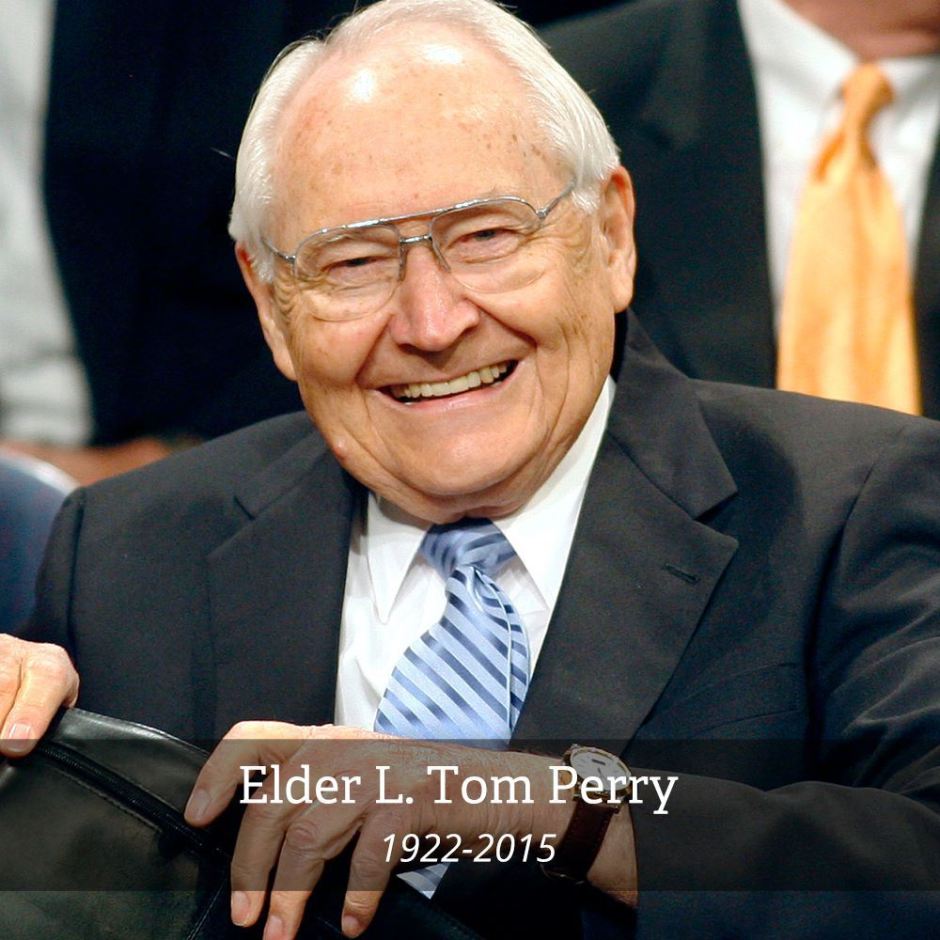 I saw the “Breaking News” item of Elder Perry’s death in my Twitter feed just as Mr. Mo and I were preparing to leave to attend a special convert baptism tonight at our church. It struck me as we drove down the street what a perfect tribute it was for a baptismal event to happen on the evening of Elder Perry’s death. I can think of no better way to possibly honor a life that was poured out in service, testimony and love for  The Church of Jesus Christ of Latter-day Saints, than by welcoming the church’s newest member through the Lord’s sacred baptismal covenant.

A beautiful night for a baptism! Welcoming a brand new brother into our #LDS Ward family #ShareGoodness #whereIam #utah It seems that heaven is smiling… (Perhaps sweet #ElderPerry was attending). To learn more about the sacred cetemony of baptism and The Church of Jesus Christ of Latter-day Saints go to www.Mormon.org

The baptismal service was beautiful. The spirit of the Lord was strong. The missionaries spoke and sang. The sweet young man being baptized sat on the front row near the baptismal font dressed all in white, holding hands with his new wife. It was a joyful, awesome occasion.

One of my favorite Conference talks by Elder Perry was given in April 1988 when was serving as a missionary in Green Bay, Wisconsin. Elder Perry talked about how to live “In the World” but not be “of the world”. He shared a story about a moral predicament he faced as a young executive required to attend “happy hour” events where alcohol was being served. Drinking alcohol is against the moral code for Mormons.

Here is how he creatively resolved the dilemma:

“I felt awkward visiting in groups where I was the only one without a drink in my hand. I kept wondering what to do with my hands. You can always put one hand in your pocket, but you look a little foolish with both of them there. I tried holding a glass of 7-Up, but it had the appearance of an alcoholic beverage.

Finally I went over to the bartender and asked him if he had any drink that was distinctively different in appearance from an alcoholic beverage. He went into the kitchen and came back with a half gallon of milk and poured me a glass.

Pouring a glass of milk at a cocktail hour was a unique event. It seemed to attract the attention of everyone, and I became the target of a lot of jesting. It embarrassed me at first, until I discovered that I was meeting more business leaders than I had at any previous gathering. I found that I did not have to violate Church standards to become a viable, contributing member of my chosen profession. It was more the case that success came because I did adhere to my values.

As Mr. Mo and I drove back down the hill to our home tonight we saw in the distance a glorious sight of the sunset bursting through the clouds and shining down on the Great Salt Lake. I couldn’t help thinking that Elder Perry must be sending his thousand watt smile through those clouds saying “All is well! Go forth with faith, and enjoy being In The World”! – MoSop