This morning we had a wonderful buffet breakfast at our hotel. We are still learning to pace ourselves with all the food and not feel like we have to ‘try it all.’ This hotel has an incredible selection of breakfast items – both European and American – including made-to-order omelettes.  I can already tell that I must ban myself from the bread table for the remainder of tour. I can’t control myself with those chocolate croissants!

Made to order Omlettes

Then it was “load and go” on the buses for a 1.5 hour drive from Munich to Nuremberg. The Choir and Orchestra were taken directly to the Meistersingerhalle for our rehearsal and sound check in preparation for the evening concert. We stayed here all day. We found our [tiny] dressing rooms and wandered the hall while our stage crew finished setting up the stage, and our sound technicians tuned the microphones. The hall fed us a gourmet buffet lunch on site soon after we arrived.

We then got on stage for a full rehearsal and sound check for the next 2 hours. [here’s a link where you can read more about MoTab sound checks]

Afterward, we had about 2 hours until they fed us again. I’ve heard that some people actually had enough energy for walking outside. The rest of us were busy taking power naps [I claimed a chair – many simply laid on the floor]. Since lunch was so huge, I assumed our dinner would be something of smaller, lighter fare. But no. They served us another gourmet buffet dinner fit for a king! [ohhh, so much wonderful food! But, I’m gonna need at least 2 more stomachs if I want to keep eating on this tour]

Sadly, I missed out on tasting the “Warm Apple Strudel” and the “Schnitzel with Noodle.” It ran out before I woke up. With this group, you snooze, you lose!

So, today was pretty much all about two things for me: Eating and Singing [with a little sleeping] and that is the extent of my Nuremberg experience.

What I Didn’t See And Do

Meanwhile… because I have a guest [my wonderful husband Mr. Mo] I actually know “what I missed”. 🙂 But, this also gives me something extra to share with you. Since tour guests must pay their own way, they do get several “excursions” and to see more sights while all the performers are stuck in a hall rehearsing all day. This is a good thing. In the olden days of tour – at least back when I first joined the choir – guests just had to sit around all day being completely bored in stadiums and concert halls while we rehearsed.

Today, our guests got to sight-see in the 15th Century Altstadt (Old Town), touring the Nuremberg Castle, climbing the bell tower, and generally exploring. Mr. Mo’s favorite place of the day was the home of German Renaissance artist Albrecht Dürer. He’s the guy who created the familiar lovely drawing of the “Praying Hands” [1508] – and, I just have to say I had no idea that drawing was so old, did you?

Built in 1509 (and still standing!) the Dürer home was quite a mansion in its day. It had many modern luxuries, such as a furnace to heat the home, ‘flushing’ toilets [when it rained] ornate glass windows, and fine craftsmanship – everything from the spiral staircase to the three headed dragon chandelier. The home is now a world heritage museum. Below are some photos from Mr Mo’s adventure. 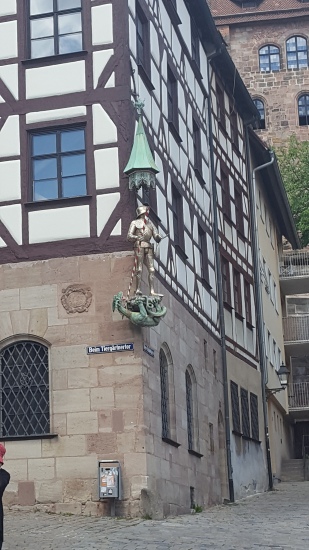 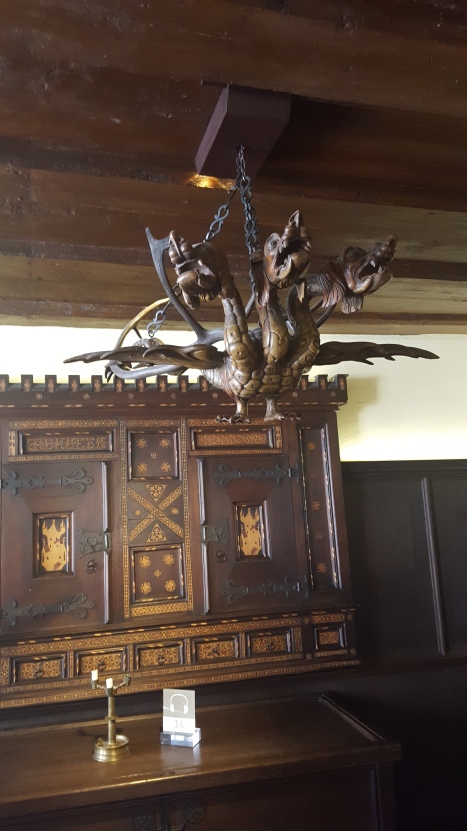 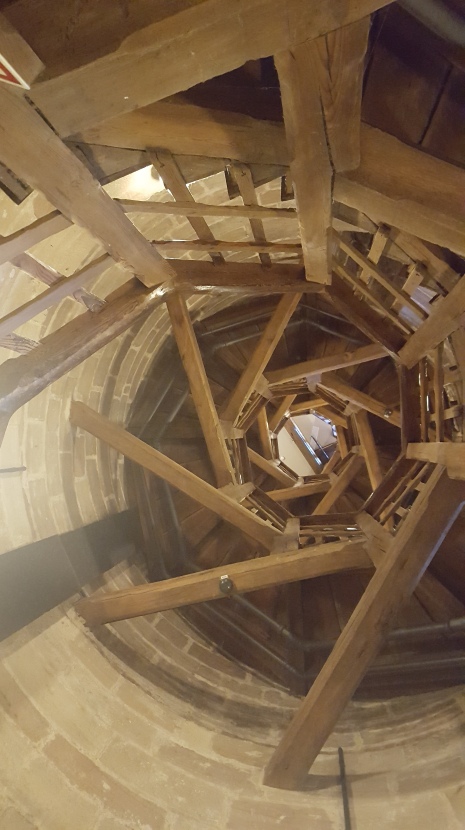 Mr. Mo enjoyed eating at two nice bistros for his lunch and dinner before returning for the concert. He has also now discovered German “Lemonade” – which consists of a glass of sparkling water with lemon slices in it. That’s it. No sweetener. But, apparently he loves it.

The Most Important Event Of The Day

The Concert!  This is what it’s all about, and thanks to diligent promotion by local church members we had 1,800 people coming tonight!

As we were waiting for the concert to begin, and cooling off outside (no air conditioning inside), we met and visited with a fascinating German member of the church who belongs to a “Mormon Bikers” group. He joined the church after reading a copy of a Book of Mormon given to him by a fellow biker friend. He was so excited about his newfound faith he wanted to share the gospel with everyone he met, so he commissioned a professional artist to airbrush the golden plates, and a scene from the Book of Mormon called “Lehi’s Dream” on his motorcycle. He carries copies of the Book of Mormon in his satchel and whenever anyone asks about the unique painting he tells the story and gives them a copy of the Book of Mormon. To date, he’s given away hundreds of books and bears testimony wherever he goes!  It was so fun to meet this wonderful man 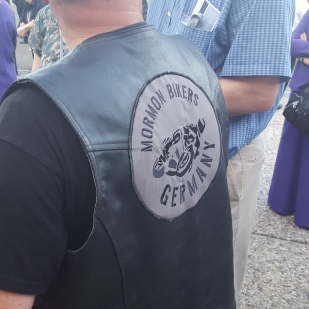 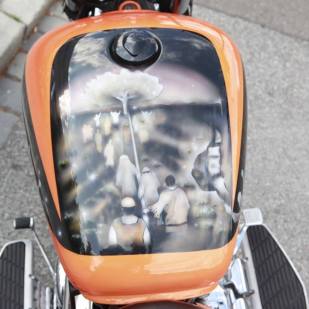 Meistersingerhalle is named after the medieval tradition of the Meistersinger [master singers], as depicted in Richard Wagner’s only comic opera, Die Meistersinger von Nürnberg. The building was completed in 1963.

It is certainly nothing special to look at on the outside. An industrial box.

But, the inside is quite impressive! The main hall hosts 80 classical concerts a year, with an additional 700 other events throughout the year. I was surprised how huge the inside was. The main hall where we performed can be transformed into several configurations. There is also a beautiful pipe organ on the stage that has – if you are interested –  6,646 pipes!

The ladies wore our new purple dresses for this concert, and the men in their new purple tie and pocket square.

After Berlin, I couldn’t wait for another opportunity to share this amazing music with a new audience. But, I wondered if this time we would get the more “German” response we’d been told to expect, with modest enthusiasm. Perhaps there would be some rhythmic clapping if we were lucky. But, it turned out that the Nuremberg audience was just as thrilled, and equally responsive. The Spirit of God was present, and there were many hearts touched on all sides of the hall. What a wonderful, joyful experience to sing here!

As I was hurrying to the bus after the concert I got another great surprise. My good friend Ben and his pretty German wife Nadja came and found me! I had forgotten that they have been living in Germany for over 6 years now. They are about an hour drive from Nuremberg, so they came to our concert, and then they found me!  I was just sad that I only had a few moments to talk before being rushed into the bus, but it was so much fun to see them! We snapped a quick photo illuminated by the bus lights.

Back we came to our “home base” in Munich. Our hotel room is very comfortable – although too warm [Germans have not fully embraced the concept of air conditioning] – and also a bit on the smallish side. It is looking very ‘lived in’ now that I have hand washed a bunch of clothing in the sink and hung them up to dry. Side note – it is really hard work and time consuming hand washing clothing. I am not going to take my washing machine for granted after this tour.

Tomorrow we get a much needed rest day, and later we will get to video call with our girls! I am just feeling so blessed right now. There are no more words. – MoSop