Today we leave Berlin and travel to Munich. But first, we were excited that we had time to go for another early morning run in the Tiergarten! Sadly, our excitement was short lived. Due to some sort of major concert event we discovered the garden had been fenced off completely during the night and we couldn’t find a way in. We tried running down the street toward the Brandenberg Gate, but the street behind the gate was completely fenced off with a guard posted. 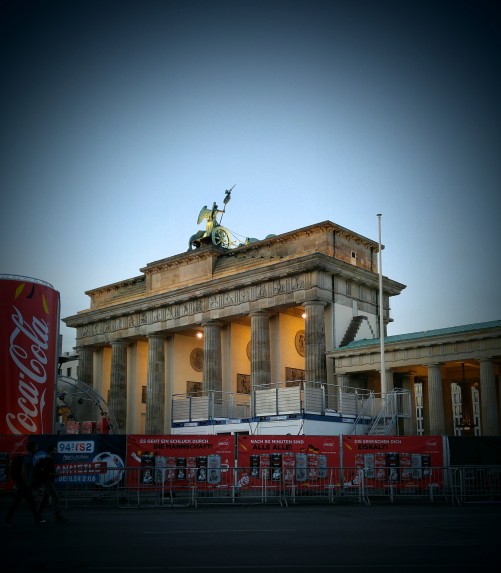 So, we took a side street that looped around to the front of the Gate in the plaza – passing a couple of stately Embassy Buildings. However, there was still a lot of fencing and a guard on that side. We were able to find one section of sidewalk to the far right of the gate which was open to pedestrians, so we jogged to the opposite side of the Tiergarten. Here we snapped a tourist-free shot of the Reichstag [a large government building] and then we kept going hoping for a way into the park.

Anywhere there was a road or a path leading into the Tiergarten there was inevitably someone standing guard to block innocent jogger-type people. I really wanted to ask why the entire park was blocked off, but neither of us are fluent in German. We saw that there was a big screen set up behind the Brandenberg Gate with stadium seating. We also saw a bunch of tents that were probably for beer and brat sales. So, this was a big event. Mr. Mo believes it has something to do with the European Cup (soccer championship) going on. Germany is in the finals right now, so perhaps they are allowing people to gather downtown to watch the event together? And, perhaps they are blocking off the park behind the event for security purposes? That’s our best guess.

I wished I knew how to convince the guard to allow two really nice harmless American joggers to just go in to explore, if we promised to come right out again in about 30 minutes…. but since I had no idea how to say that in German, and the guard didn’t seem interested in making conversation at 7 am, we had to give up and jog back the way we came.

Just for the record – going “back the way we came” is something I loathe. The idea of “Out and back” makes no sense to me. It ruins the whole experience of exploring. But, we did stop and take a closer look at the “Memorial to the Murdered Jews” on the way back, which made the return trip worthwhile. This art installment takes up an entire city block, and is as fascinating as it is stark. The name itself doesn’t pull any punches. It clearly states that the Jews were “murdered” during the Holocaust. The design is meant to represent multi-layered anonymous caskets that go on endlessly. The perspective changes continually depending on the light, and where you are standing. Each row of these “caskets” has a brick path between them that leads you down into the ground and then rises up again on the other side.

I’m glad I got the chance to experience this monument in the quiet morning, without anyone else around. It had a very powerful impact. I have to admit that I didn’t have the courage to run all the way through one of the “alleys”. It spooked me too much. It is a very effective holocaust memorial.

After a warm shower and eating a nice too-big buffet breakfast it was time to “Load and Go” on our buses headed to Munich. Our itineraries told us to expect a 6 hour journey, with only 1 brief rest stop.

Highlight Of The Day – The Rest Stop

All I can say is Germany knows how to do Rest Stops! They not only include a full service gas station, but also a playground, a convenience store AND a full restaurant that spans across both sides of the AutoBahn. People parked on both sides of the highway can take a glass elevator up to the restaurant.

During this rest stop we had our first experience of Paying To Pee. Yes, in Europe if you want to use a public toilet you often have to pay. This rest stop had a very fancy “W.C.” where you insert your coins into a machine and then a turnstile lets you into the room with the toilet stalls. There was a woman manning the machine and helping the long line of people get the correct change and keep things moving. She was also in charge of cleaning and restocking the restroom with paper towels and toilet paper. It was very efficiently run. When you pay .50€ to use the toilet, you get a coupon for .50€ toward any purchase at the restaurant. So Smart!

Something I already love about Germany is that all of the toilets are in little private ‘rooms’ with your own door. No one can peek through the cracks or look under the door like in America. I also love how clean the public toilets are. These particular toilets were “self cleaning”. After being used the seats would rotate and cleaning fluid would be sprayed on them, and then some air would blow them dry. This was a little freaky and entertaining to watch. Whatever you do, SIT DOWN! Because, if you try to squat and “hover” over the toilet bowl like a typical American then inevitably your butt will shift and the toilet sensor will go off, at which point the toilet will begin rotating and disinfecting below, and then you may let out a little scream [okay yes, I am speaking from experience].

I didn’t take a photo of the toilets so you’ll just have to use your imagination.

The rest of our morning and afternoon was spent cramped in a bus for many hours while the temperature ranged between Arctic Ice Castle (air blowing) versus Boiling Lava Volcano (air not blowing). This has nothing to do with German tour buses and everything to do with Tour Buses in general. After 4 Tours I have learned to always pack a large blanket, along with my eye mask, neck pillow and ear plugs for bus rides, and then I hope for the air to remain ON.

Today, we got to spend an extra hour on the bus due to an accident on the Autobahn which brought us to a standstill. Not fun. But, we got to see beautiful German countryside AND I found out what hops looks like growing in rows of fields on tall wires. (Germans do love their beer).

In the end we finally arrived safely to Munich, Germany. When I exited the bus I got to see THIS gorgeous Opera House! (I wished I could have seen inside)

And then we got to walk around the charming little village to the beautiful Marienplatz where we would purchase some dinner.

I instantly fell in love with Munich. How can you not love a city that looks like this?

We ended up eating in the Ratskeller (basement) – of the beautiful old Munich Rathous (Town Hall). Mr. Mo had researched online in advance, and it came with high reviews.

How can you go wrong eating in a place that looks like this?! [don’t you wish your basement looked like this?]

The food was delicious. The ambiance was lovely. Our waiter was from France, so he and Mr. Mo had a delightful time speaking to each other in French. We dined with another Choir member named Edith and her husband Roy who we didn’t know until now. It was so much fun. They shared how they met while serving in the Air Force, and Edith shared her fascinating and faith promoting conversion story.

This entire evening will always be a cherished memory.

Note: Those big fresh pretzels in a basket on your restaurant table ARE just as delicious as they look. But, unlike America, they are not complimentary with your meal. [although they are totally worth the 1.50€]

We’ve checked into our nice hotel now. Our Choir group is divided into two hotels here in Munich, located on opposite sides of the city. Ours is the Munich Marriott on Berliner Strauss. It is so lovely. It is located on a very peaceful neighborhood street, and there are parks and a subway entrance nearby. We are actually able to unpack and get comfortable here because this hotel will be our “home base” for the next 6 nights!