This week I shared that Mr. Mo and I are headed to Spain on October 8 to walk our first Camino de Santiago pilgrimage!! I’ve shared WHY we are not waiting until we “have enough time or enough money”. And, I’ve mentioned some great travel secrets for getting a good deal.

The most popular pilgrim route to Santiago de Compostela is the 800 Kilometer (500 mile) Camino Francés [French Way],  as seen in the Emilio Esteves/Martin Sheen movie The Way. But there are 13 official routes extending in every direction across France, Spain and Portugal that lead pilgrims to the legendary burial place of the apostle St. James.

There is literally “a Way” for everyone.

So… Which Way will we be going?

Two roads diverged in a wood, and I—
I took the one less traveled by,
And that has made all the difference.
– Robert Frost

When Mr. Mo and I determined that we had 10 days total for our adventure, subtracting travel days that left us approximately 6-7 days of walking time. We researched all of our options and chose el Camino Inglés – “The English Way” – which can be completed in 5-7 days (depending on how fast or far you want to walk per day), and fulfills the 100K+ requirement for gaining your Compostela – the official Pilgrim Certificate.

Camino Inglés derives its name from the English people who made religious pilgrimage to the burial site of Saint James [comprising English, Scottish, Welch, and Irish] beginning in the 9th Century.

The Camino Inglés  is one of the most ancient of all the routes – and yet one of the least traveled today. In fact, it has been called “The Forgotten Pilgrimage.” According to statistics gathered by the Pilgrim’s Office in Santiago in 2017 they received 301,006 pilgrims of which 180,726 (or 60%) were classed as having come via the Camino Frances. By contrast, 11,321 (3.76%) (5%) arrived via the Camino Inglés.

The Camino Inglés is the shortest of all the Camino routes leading to Santiago de Compostela – and yet it is not the easiest! On a scale of 1-5 in difficulty, this one is rated a 4. There are many steep ascents and descents, with long walks between towns providing available lodging. Also, due to its proximity to the Atlantic Ocean the weather can be unpredictable (a challenge for packing – since one must always plan for every kind of weather). Located in the Galician region of Spain, this route is known for it’s beautiful & diverse scenery, fresh seafood, quiet paths, and… its rain. Despite The “English” name, very few people actually speak English in this area. The official Galician dialect is Gallegos. Many are also bi-lingual in Spanish.

“The boat is safer anchored at the port; but that’s not the aim of boats.”
― Paulo Coelho, The Pilgrimage

In medieval times, English travelers would launch from the well-known pilgrim port city of Plymouth, in South Western England. There is actually a memorial marker in Plymouth commemorating the first pilgrims of Plymouth who traveled to Santiago de Compostela. (Notice the scallop shell – the emblem of a Camino pilgrim!)

Way of Saint James
Saint James, one of the apostles, was martyred in AD44. Legend has it that he spent a number of years preaching in Spain and was subsequently buried there. His supposed burial site was discovered in the early 9th Century and became a focus of pilgrimage. Hundreds of thousands subsequently visited Santiago de Compostela. many pilgrims sailed from England through Plymouth, which was one of of only two ports licensed for the journey. The pilgrims often wore a sign indicating their destination. Those going to Santiago de Compostela wore a scallop shell. This eventually became a general symbol of pilgrimage.

English pilgrims would leave their homes throughout the isles, and walk to Plymouth. Then, they would set sail across the Bay of Biscay in small sailing vessels (often under treacherous circumstances). These “Seafaring Pilgrims” would land in port towns along North-Western Spain. The most common were Ferrol and A Coruña.

After landing in Spain, the English pilgrims would walk to Santiago de Compostela. Later, they would make the entire journey in reverse. 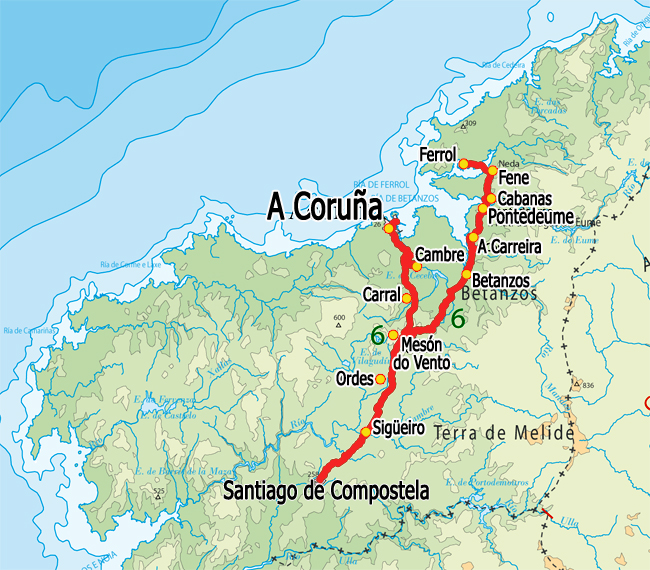 As I mentioned, in order for modern day pilgrims to receive their Compostella, a minimum of 100 kilometers must be walked. Therefore, Mr. Mo and I will be starting our pilgrimage in Ferrol!

Our journey from Salt Lake City, Utah in the USA to Farrol, Spain will not be an easy one! It involves 1 Uber, 4 flights and 1 taxi, comprising 36 continuous traveling hours [or layovers] from October 8th – 9th, 2018.

On October 10, 2018 we begin walking our very first day of pilgrimage on The English Way!! 🙂

“When in doubt, just take the next small step”
― Paulo Coelho, The Pilgrimage

I am leaving you with an Old English hymn “To Be a Pilgrim” (also commonly known as “He who would Valiant be“). This is the only hymn that writer John Bunyan (of Pilgrim’s Progress fame) is credited with. It first appeared in Part 2 of The Pilgrim’s Progress, written in 1684. I have included the original verses, which the video very accurately uses – combined with period instruments.

Fun Random Fact: “To be a Pilgrim” was sung at the funeral of former British Prime Minister Margaret Thatcher on April 17, 2013 (the English Hymnal version). It was one of her favorite hymns.

Verse 1: Who would true valour see,
Let him come hither;
One here will constant be,
Come wind, come weather
There’s no discouragement
Shall make him once relent
His first avowed intent
To be a pilgrim.

Verse 2: Whoso beset him round
With dismal stories,
Do but themselves confound;
His strength the more is.
No lion can him fright,
He’ll with a giant fight,
But he will have a right
To be a pilgrim.

Verse 3: Hobgoblin, nor foul fiend
Can daunt his spirit
He knows, he at the end
Shall life inherit.
Then fancies fly away,
He’ll fear not what men say,
He’ll labour night and day
To be a pilgrim.