For some reason, the subject of politics always seems to wake the “raging beast” within people. I find this unproductive, and completely contrary to my site’s theme. Therefore, it is with soft footsteps I venture into recent government decisions.

That said, if something endangers individual and collective spirituality, then I feel it is within the mission of this blog to raise a voice. It is my belief that the US Bailouts are a serious breach of our Constitutional liberty, and this course of action presents great spiritual danger as well as political. Over 30 years ago a prophetic message was given, which sheds light on this subject. Sadly, the warning has gone unheeded, and the consequences are being fulfilled. However, knowledge is power,  my friends!

“it becometh every man who hath been warned

The attached video contains excerpts of a talk given by President Ezra Taft Benson on April 12, 1977 to the students at Brigham Young University, entitled A Vision And A Hope For The Youth Of Zion. At the time of this speech, Benson was serving as one of the Twelve Apostles of the Church of Jesus Christ of Latter-day Saints. During his lifetime, Elder Benson had the unusual experience to serve concurrently as an LDS Apostle, and as US Secretary of Agriculture in Washington DC under President Dwight D. Eisenhower from 1953-1961. Elder Benson was admired not only as a man who possessed great spiritual strength, but also for his intellect and integrity. 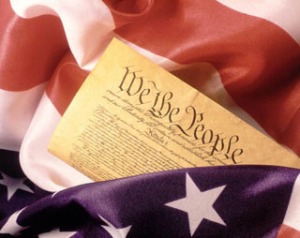 Benson was a life-long supporter and champion of the American Constitution, which modern prophets have testified repeatedly is a divinely inspired document. Latter-day Saints throughout the world take their responsibilities as citizens seriously, in whatever country we may reside. We believe in keeping the laws of the land, and doing all within our power to protect and defend freedom. (Article of Faith 12) Here’s a major reason why we believe this is so important:

“The gospel of Jesus Christ can prosper only in an atmosphere of freedom. As members of his Church, we have a major responsibility to do all in our power to see that freedom is preserved and safeguarded.” – Benson

Ezra Taft Benson became the 13th prophet and President of the Church of Jesus Christ of Latter-day Saints on November 10, 1985. I encourage you to listen carefully to his prophetic warning given in 1977, and if you have the time, studying the entire transcript is very rewarding. Here are some significant points to ponder, (with video time stamp):

“If we continue to follow the trend in which we are heading today, two things will inevitably result: first, a loss of our personal freedom, and second, financial bankruptcy. This is the price we pay when we turn away from God and the principles which he has taught and turn to government to do everything for us. It is the formula by which nations become enslaved.” (at 2:39)

“Compulsory benevolence is not charity.” (at 6:00)

“…with increased benefits and greater numbers of recipients, even though the tax base has been increased, we will have larger deficits in the future…” (at 8:00)

“…We cannot long pursue the present trend without its bringing us to national insolvency.” (at 8:49)

This talk also clearly addresses the definition of Socialism & Communism, and details the devastation that a “Redistribution of Wealth” system creates:

In the concluding thoughts of Benson’s talk (not heard on this video), are these words:

“You are not here to be a parasite or freeloader. The price you pay for “something for nothing” may be more than you can afford. Do not rationalize your acceptance of government gratuities by saying, “I am a contributing taxpayer too.” By doing this you contribute to the problem which is leading this nation to financial insolvency.“

“Society may rationalize immorality, but God cannot condone it. Society sponsors Sabbath breaking, but the Church counsels otherwise. Society profanes the name of Deity, but Latter-day Saints cannot countenance it. Because society condones a dole, which demoralizes man and weakens his God-given initiative and character, can we?“

My take-home message: Each of us has the choice to be either a part of the problem or a part of the solution. We can choose to teach our children by example the joy of work, the ability to postpone our wants, and to embrace economic independence by not allowing ourselves to become enslaved by debt. If our country is to be truly healed, it must come from within.

Your comments, observations, opinions and ideas are encouraged and greatly appreciated!

Please choose to express yourself in a thoughtful & respectful manner, so I don’t have to delete any of your absolute brilliance! – MoSop