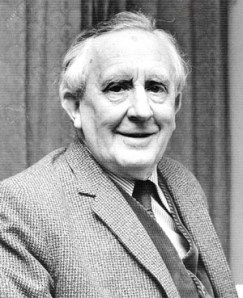 Today is author J.R.R. Tolkien’s birthday. He would have been 118. Born on Jan. 3, 1892 (died Sept. 2, 1973), John Ronald Reuel Tolkien became a famous English writer, poet, philologist, and university professor. He is best known as the author of the classic fantasy works The Hobbit and The Lord of the Rings trilogy. Indeed, he has been called the “Father of Modern Fantasy Literature”.

It is well known that Tolkien’s closest friend was fellow-author and Christian convert C.S. Lewis. Mormons Love C.S. Lewis. He is considered one of the most quoted non-LDS authors over an LDS pulpit – and likewise, J.R.R. Tolkien is admired no less.

Second President of the LDS Church Brigham Young said that “much … knowledge is obtained from books, which have been written by men who have contemplated deeply on various subjects, and the revelations of Jesus have opened their minds, whether they knew it or acknowledged it or not.” (Journal of Discourses 12:116, emphasis added.)

The Prophet Joseph Smith was admonished that we need to seek “out of the best books words of wisdom…seek learning, even by study and also by faith.” (D&C 88:118.) The Lord further urged that we need to “study and learn, and become acquainted with all good books, and with languages, tongues, and people.” (D&C 90:15.)

We may not be able to fix the whole world, but we can strive to fix what may be amiss in our own families. Tolkien reminds us:

“It is not our part to master all the tides of the world, but to do what is in us for the succour of those years wherein we are set, uprooting the evil in the fields that we know, so that those who live after may have clean earth to till. What weather they shall have is not ours to rule” (The Return of the King [1965], 190).

From “Hope Through the Atonement of Jesus Christ“, emphasis added.

2. LDS-owned Brigham Young University holds a large annual Women’s Conference. The 1983 Conference chose a quote by Tolkien as their theme:

All that is gold does not glitter,
Not all those who wander are lost,
The old that is strong does not wither,
Deep roots are not reached by the frost.
(J. R. R. Tolkien, from The Fellowship of the Ring.)

The theme was addressed thoughtfully and creatively by students, educators, and General Authorities alike in a wide variety of addresses, workshops, and opportunities for learning attended by over two thousand participants.

Elder Neal A. Maxwell was one of the conference’s speakers, and expanded the theme’s message.

“Your Tolkien theme, ‘Deep roots are not reached by the frost,’ might well have had added to it, ‘nor are they scorched by the sun.’ Jesus described the realities of that scorching sun when he talked in these terms: ‘And some fell upon the stony places, where they had not much earth, and forthwith they sprung up because they had no deepness of earth. And when the sun was up, they were scorched, and because they had no root, they withered away.’ (Matt. 13:5–6.)”

“In our own lives, the heat will come—not alone in the rigors of daily life, but also in the special summer of circumstance at that point in history when the leaves of the fig trees sprout. The anticipated summer is upon us, and only those who are (to cite Peter and Paul’s adjectives) ‘grounded, rooted, established and settled’ will survive spiritually. (See Eph. 3:17; Col. 1:23; Col. 2:7.)”

“[C.S. Lewis puts] the gospel in a nongospel context. And he’s not writing just for a religious audience. He’s accepted out there in the real world. I found the same thing with J. R. R. Tolkien. This happened while I was in college. The fact that their fantasy was considered as a viable kind of expression gave me the courage to say, “Why don’t I try to do the same sort of thing visually and see what happens?”

From the interview “Windows On Wonder: An Interview with James C. Christensen“, New Era August, 1989

And last, but not least, Mormon Soprano raises her own toast. I have always loved the following words of Tolkien wisdom:

Nearly all marriages, even happy ones, are mistakes: in the sense that almost certainly (in a more perfect world, or even with a little more care in this very imperfect one) both partners might be found more suitable mates. But the real soul-mate is the one you are actually married to.  (J. R. R. Tolkien, Letter to Michael Tolkien, March 1941)