The 2010 Mormon Tabernacle Choir Christmas Concert beat all records for ticket requests, and crowds. Adorning fans queued up to the Conference Center hours beforehand hoping for standby seating. The excitement and energy of the crowd was truly epic. 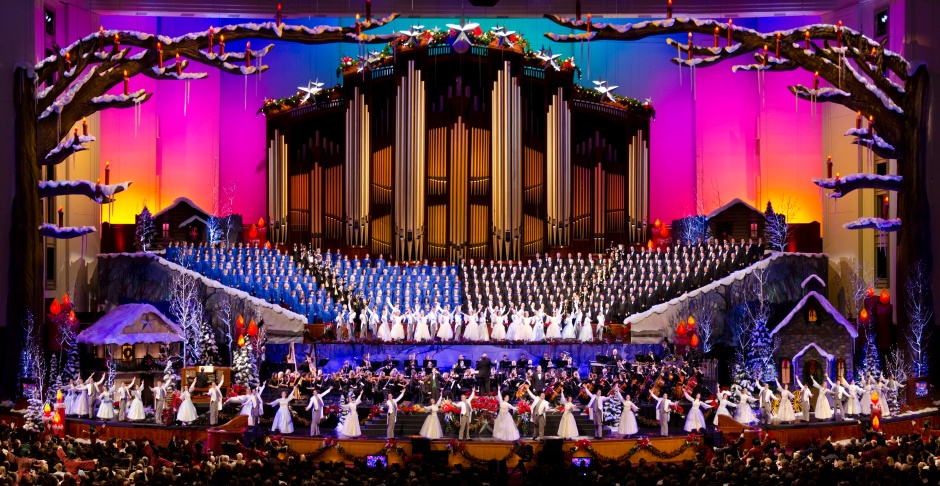 Singer David Archuleta made history as the youngest guest artist to ever grace the Conference Center Christmas stage. At his young age, Archuleta had already faced tremendous personal challenges both in his family life with the pending divorce of his parents, and the harsh artistic spotlight as a finalist on the popular TV talent competition ‘American Idol’. To be headlining 4 major concerts performed to a 21,000+ audience daily, plus knowing it was being filming for later release as a PBS Television Special to be broadcast to over 4 million, the pressure and expectations must have been especially intense for the 18-year-old idol (his 19th birthday still 2 weeks away). Despite it all, David charmed the audience with his radiant smile, solid vocals and genuine sweetness. [I honestly don’t think the Conference Center has ever had a more enthusiastic throng].

Joining “the voice” was veteran actor of stage and screen Sir Michael York as our Narrator. I have to admit, I’ve personally harbored a crush on York since I was 10 years old. One of my favorite movies growing up was the sci-fi dystopian Logan’s Run.  Hey, don’t laugh. The special effects were very cool for it’s day (it was also the first time to use Dolby Sound), and the entire film totally captured my young imagination. Of course, York’s 50-year distinguished career includes being an Emmy-winning Broadway performer, recording over 100 audio books, a highly sought-after Shakespearean actor, an acclaimed regular on BBC, and knighted by the Queen. (But, I’ll always think of him as Logan-5) York is also admired for his enduring romance with his wife Pat. they celebrated 45 years of marriage this year. Pat joined Sir York in Salt Lake City during our concert week.

Getting the chance to perform on the same stage of this great actor and loyal husband was as much a thrill for me as I’m sure seeing & hearing heart-throb Archuleta was for the majority of our audience. 🙂 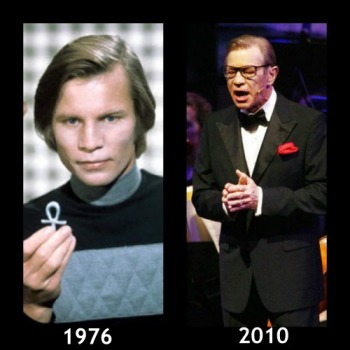 During his performance week, Michael York was waging a battle with a rare and mysterious disorder that was affecting his eyesight (which required him to wear tinted lenses), and altering his iconic mellow voice. One can only imagine how distressed he was! Originally thought to be a form of cancer and then several other medical anomalies, his condition was finally diagnosed in 2013 and treated at Mayo Clinic as the rare and potentially fatal condition of Amyloidosis.

The Special Music and the Spoken Word Broadcast entitled “Sing Choir’s of Angels” aired Sunday December 19th, 2010 featuring Michael York’s Narration from the 2010 Christmas Concert, which tells the story of Welsh pioneer John Perry, and the origin of the Mormon Tabernacle Choir.

Sing Choir of Angels – Music and the Spoken Word – December 19, 2010 with Michael York

If you’ve been following my series of Christmas Concert recaps, then you may be recognizing a pattern. Each one of the Mormon Tabernacle Choir special guest artists have arrived with unique challenges and trials they are personally enduring  – and yet each one of them have risen above their challenges, giving 100% of their talents to provide  inspirational performances that literally bless millions for generations to come. How inspiring they all are! In 2010, we were blessed to have David Archuleta, and Michael York! – MoSop

GET A COPY: “Glad Tidings of Christmas” Live Performance on CD or DVD

I've got a LOT of catching up to do! Here's a little montage from our very first overnight backpacking adventure in May 2021! This was supposed to be a 15 mile out-and-back up Farmington Creek Trail. As you will see, things started out great, but didnt end as planned!!!
I received my 1st dose today! #covid19vacccine One more arm for mankind! One step closer to reaching herd immunity, and the end of this devastating pandemic. Thank you to all of the tireless, selfless volunteers who are so helpful and cheerful organizing this massive effort! There is a very tangible feeling of HOPE and EXCITEMENT in the air!
My favorite! [and the trumpet... Chef's kiss!] #berniememes
The line for #COVID19 testing keeps growing here. Today there's about 30 cars consistently waiting here. Yesterday I counted over 50 cars often. They've changed how the cars route through the parking lot to accommodate them all. Just a week ago I only saw a handful total per day. It is sad and disheartening to see the surge, and it is projected to get worse. Kudos to @uofuhealth for keeping the line moving, and working so hard out in the blazing 90+F sun! God bless you. #Utah PLEASE 😷 #wearamask #staysafe #maskuputah #stayhomeifyoucan #thisisreal
God Bless #America, land that I love.🇺🇲 #happy4thofjuly 🎆 Have a safe holiday. Remember to practice physically distancing and 😷
We went to our happy place.
This quote resonates with me today. I'm thinking about how the entire #COVID19 experience can become a "finest moment". Where will it propel me and you? What new ways and truths are we finding? I see it already happening for me and others. There are also positive national and global effect. But, it is the internal, personal process of improvement and enlightenment that gives me hope. This energizes me when the solitude and the news starts to drag me down.
Tonight is the #strawberrymoon and it's huge! 🌕 This is the view from my deck. Seeing this beautiful bright light filling the darkness gives me an incredible feeling of peace, and hope.. I think we are part of something so much greater than we can comprehend. We really aren't alone in this Universe. There is a tremdous power of unity growing out of our national darkness. We can be the light that changes our world together. #blacklivesmatter #loveoneanother
I've caught my coworker taking a #catnap on the job twice already today. It's only 8:30 am. #workingfromhome #ninja #friyay