Let the storm of goodness commence! A new age of internet-saavy “stormin’ Mormons” has officially launched! 🙂 August 19, 2014 will be remembered as a notable tipping point in Latter-day Saint history, and potentially world history, thanks to apostle David A. Bednar’s landmark message at BYU Education Week. During his speech, Elder Bednar made an impassioned plea to members of The Church of Jesus Christ of Latter-day Saints around the world to actively use social media and new technology to “flood the earth” with Gospel-goodness! The apostle’s message was broadcast live over BYU and Church cable and satellite stations as well as on YouTube and is now available to watch online here, or watch and read the full transcript here.

Elder Bednar stated that “we live in a distinctive dispensation” which was prophesied from the beginning of the earth. Former generations “have looked forward with joyful anticipation to the day in which we live…they have sung, and written and prophesied of this our day.” One such prophesy was given by President David O. McKay during October Conference, 1966. Pres. McKay stated there were scientific discoveries coming that would “stagger the imagination” and make possible the preaching of the gospel to every kindred, tongue, and people. He also gave a warning: Limitless Perils and Untold Possibilities. 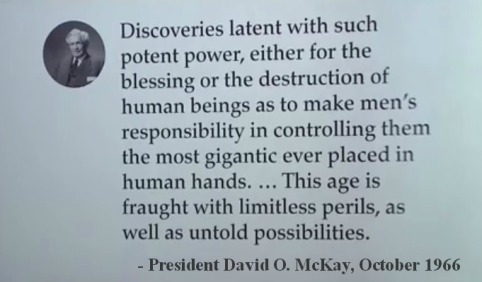 Elder Bednar declared that all technologies and inventions that we now have at our fingertips, or are to come, have been divinely inspired by God to be used for his purposes to share the gospel message with the world.

“Messages and pictures that used to require days, weeks, and months to send and receive now can be communicated around the world in seconds. We thank thee, O God, for the prophets who have taught and prepared us for the time in which we live—and who have urged us to use technological advancements to support the ongoing mission of The Church of Jesus Christ of Latter-day Saints.”

Elder Bednar outlined several ways that social media and the internet are being used by members and missionaries.

Approximately 40 percent of our worldwide missionary force soon will be using digital devices as tools in the work of conversion, retention, and activation. I am confident all of us also recognize how technology has accelerated family history and temple work, our individual and family study of the restored gospel, and made it possible for us to learn about, see, and experience the world in remarkable ways.

Here are the 4 principles / rules that Elder Bednar instructed we follow when using social media:

Included in this talk was an official announcement of a new feature film. MEET THE MORMONS is a full-length documentary produced and funded by The Church of Jesus Christ of Latter-day Saints; another historic first! The film be released in theaters across the nation on October 10, 2014. It’s worth noting that the Church will make not profit financially from this movie. All net proceeds are being donated directly to The American Red Cross in support of their important charitable work to relieve suffering around the world.

Elder Bednar’s speech was very exciting and validating for me personally. Over the past 7 years I have felt this crazy powerful force driving and motivating me to blog, post, tweet, pin, & share online. At times I really have had to pace myself from not becoming obsessed with my social media accounts which can so easily consume my thoughts and time. More than once I’ve wondered if it’s really all worth it. Yesterday I felt some relief to know that my efforts are not just crazy but may actually be part of a grand eternal plan, which is beginning to be revealed. A reporter recently interviewed me about my blog [need to write a separate post about that!). He asked me if I planned to continue to blog. What I think I said was “I’m sure I will. I love to write, and I’ve invested so much time into my blog already it would be sad to stop” or some-such thing like that. But, what I WISH I’d said was something like:

“Absolutely! This is only the tip of the iceberg! Mormon Soprano is here to stay and ready to rock the world with goodness!”

Whatever may lie ahead in the history of my life and the future of The Church of Jesus Christ of Latter-day Saints, one thing is certain. We just entered the very beginning of something really really big. Starting here, starting now, we and move forward into the storm of  hashtag “ShareGoodness”, as well as #LDSConf, #IPrayWhen, #ItWasMom, and many more campaigns to come!

I am so EXCITED to be born at this time of Limitless Perils and Untold Possibilities. GO TEAM MORMON! – MoSop